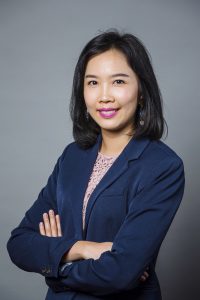 Awards & Honors
Full scholarship from the Ministry of Higher Education, Science, Research, and Innovation of Thailand

Juthamas comes to Georgetown from Thammasat University, Thailand, where she was a lecturer in law. Her field of interest and expertise focus on electronic commerce, particularly in the area of contract and consumer protection laws. Juthamas’ proposed doctoral dissertation explores pre-contractual duties to disclose information in online consumer contracts.

After earning her first LL.M. in 2013, Juthamas was admitted as a lecturer in law at Chulalongkorn University, and in the following year, decided to join the Faculty of Law at Thammasat University. During that time, she taught classes such as Juristic Act and Contract Law, Legal Methodology, and Introduction to Law. She will return to her full-time position as a lecturer in law at Thammasat University after completing her S.J.D.

The Question of Precedence between Articles 48 and 49 of the 1980 United Nations Convention on Contracts for the International Sale of Goods,
2 Chulalongkorn L.J. 133-153 (2014)