In recent years, investor-state dispute settlement (ISDS) has been at the center of the debate over globalizations’ effects and the entrenchment of corporate power worldwide. As the number of ISDS cases has grown, so too has skepticism over the investment regime’s benefits. Concerns about investors’ power and the reduction of governments’ policy space have emerged, in tandem with incoherent, sometimes contradictory, decisions by investment tribunals. Latin American countries have taken different approaches. For example, as a result of their experiences with ISDS, Argentina, Ecuador, and Uruguay are all currently debating revisions to their treaty models and investment policies to ensure that they pursue the public interest. Colombia’s Constitutional Court recently issued two judgements conditioning the ratification of international investment agreements with France and Israel on the treaties not providing more favorable treatment to foreign investors over national ones. Brazil has so far rejected the ISDS model and instead proposed creating Cooperation and Facilitation Investment Agreements that prioritize inter-governmental cooperation and dispute prevention as a choice to attract and retain investment.

Meanwhile, in the United States, criticism of ISDS has come from both sides of the political spectrum, in voices as diverse as Public Citizen and Cato Institute, the U.S. Trade Representative Robert Lighthizer and Senator Elizabeth Warren, and Chief Justice John Roberts and economist Joseph Stiglitz. Opposition to TPP in the U.S., for instance, was largely fueled by the critiques of ISDS. Additionally, as emerging economies now account for more than half of global foreign direct investment (FDI) inflows and almost one third of outflows, rich countries are increasingly concerned about the system’s restrictions on their own regulatory space.

Against the backdrop of the ISDS backlash, a number of proposals for reform have begun to surface. The European Union and international institutions such as UNCITRAL and UNCTAD are leading the agenda for reform. At CAROLA, we would like to explore how the international investment regime could be reshaped from the global south, reflecting the interests of developing countries, and in particular of Latin America. What has been the experience of Latin American countries with ISDS? What version of international investment ordering are countries in Latin America interested in pursuing? Is there enough common ground between the nations of the region to follow a unified agenda for reform? Capitalizing on the momentum generated by UNCITRAL’s Working Group III October 2019 meeting on Investor-State Dispute Settlement Reform, CAROLA seeks to provide a platform for Latin American stakeholders to discuss these questions.

An Overview of ISDS in Latin America 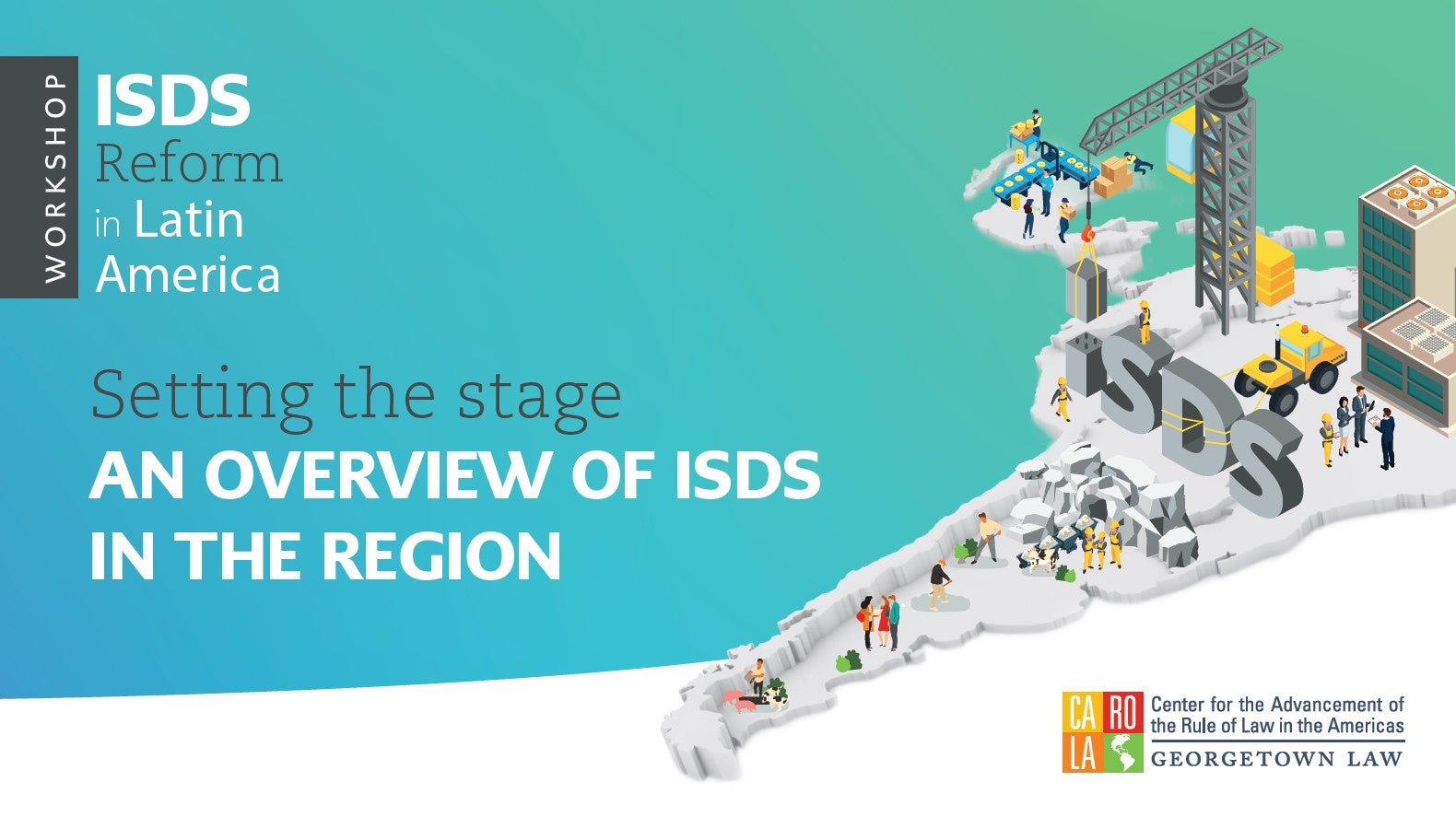 On September 16, 2019, Georgetown Law’s Center for the Advancement of the Rule of Law in the Americas (CAROLA) hosted a one-day conference on “ISDS Reform in Latin America.” The program brought together delegates from Argentina, Bolivia, Brazil, Chile, Colombia, Costa Rica, the Dominican Republic, Ecuador, Mexico, Peru, and Uruguay to share their experiences in the negotiation, administration, and litigation of investment treaties and to identify areas of concern and potential reform. The workshop is part of a broader initiative to provide delegates from Latin American countries a permanent platform for deliberation and regional cooperation as they seek to reform the international investment system. Although workshop discussions were closed-door, a lunch keynote lecture "ISDS and Development: Lessons for a Reform Agenda" with Professor Jeffrey Sachs of Columbia University and a closing session with a presentation of the main workshop conclusions were open to the public.

The group reached five conclusions on which there was general agreement: