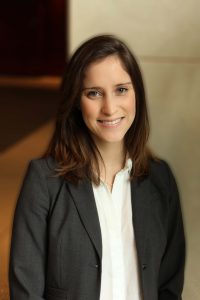 Alessandra graduated from Haverford College in 2017 with a Bachelor of Arts in Political Science with a minor in French and Francophone Studies. While at Haverford, Alessandra was also a member of the women’s soccer team, and was named to the academic honor roll every year she was eligible. Alessandra’s interest in languages and multicultural dynamics began at an early age. Born to a Canadian mother and El Salvadorian father, she grew up trilingual and attended the French American bilingual school, École Bilingue, in Berkeley, California. Alessandra continued her French studies throughout college, participating in a summer abroad program at L’Institut d’Avignon in Avignon, France, in 2015.

Throughout college, Alessandra also volunteered as a fourth grade tutor with Puentes Hacia El Futuro, an organization helping students in the Philadelphia Latino immigrant community achieve greater educational outcomes. After graduating from Haverford, Alessandra spent the next two years working for an immigration attorney in Philadelphia, Pennsylvania. As a legal assistant, Alessandra prepared deportation defense, asylum, and family-based immigration applications. She also had the opportunity to interview clients in English, Spanish, and French about their persecution experiences, in order to draft affidavits that synthesized and contextualized these individual stories in historical and political context. At Georgetown Law, Alessandra hopes to pursue her interest in immigration law and international human rights.