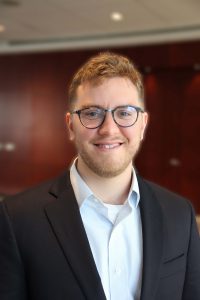 Ben Welna was born in Rio de Janeiro, Brazil and spent his early childhood in Mexico. He studied history at Carleton College in Northfield, Minnesota. Mid-west winters led Ben to study abroad twice, first in Ecuador, and later in both Guatemala and Mexico.

After college, Ben served as a Peace Corps Volunteer for two years in Tanzania. He taught English at a rural high school, and won and managed grants to improve water and bathroom infrastructure. Upon returning to the United States, Ben worked for three years for the Federal Acquisition Service at the U.S. General Services Administration in Washington, D.C.

Ben speaks Spanish and Kiswahili fluently. He is interested in immigration law. He and his wife live in the Bloomingdale neighborhood with their terrier. To relax, Ben bakes pies and practices yoga.