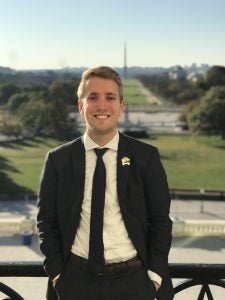 Dustin Vesey graduated with distinction from Yale University in 2017 with a B.A. in Political Science and a concentration in international relations. At Georgetown, he is jointly pursuing a J.D. and an M.S. in Foreign Service, where he is concentrating in Global Politics and Security and is also a candidate for certificates in Asian studies and diplomatic studies.

As an undergraduate, Dustin spent his summers participating in an intensive Chinese language program in Beijing, coordinating public diplomacy programs for the US-Asia Institute, and drafting policy papers for the European Union Delegation to the United States on Asian and Middle Eastern security issues. He wrote his undergraduate thesis on the supply-side limits of China’s water security policies and implications for the country’s ability to maintain sustainable growth. Outside of the classroom while at Yale, Dustin managed a late-night restaurant and was the captain of the alpine ski team. He comes to Georgetown after working for two and a half years in the U.S. Senate, where he helped manage the foreign policy, judiciary, and homeland security portfolios for the senior senator from his home state of Arizona. Prior to employment on the Hill, Dustin completed a Fulbright Scholarship in rural Malaysia.

At Georgetown, Dustin is an Opportunity Scholarship recipient, a 2019 Dennis Washington Graduate Scholar, and was an editor for the Georgetown Journal of International Affairs during his M.S. year. He is interested in international treaty negotiation, diplomacy, and national security law broadly, focusing particularly on East Asia, the Indo-Pacific, and the Middle East. He enjoys snowboarding, SCUBA diving, climbing, backpacking, and generally looks for any excuse he can find to get outdoors. He is proficient in Mandarin Chinese and also enjoys speaking Spanish and Malay. A former QuestBridge Scholar, he was the first in his family to graduate from college.