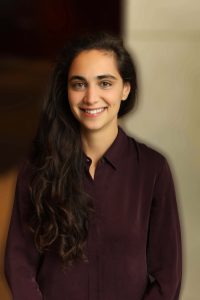 Eliane is co-president of the GLS Class of 2022. She completed her bachelor’s degree in Politics, Psychology and Sociology at Cambridge University in 2014. During her time there she helped build the international platform for the UK’s first student-run think tank, The Wilberforce Society (TWS), as their inaugural Director for International Affairs. She also contributed the Democracy and Fair Elections chapter of TWS’s report for Lawyers Without Borders, who were consulting for the Tunisian National Constituent Assembly in 2012. Fascinated with political structures in the Middle East, Eliane wrote her dissertation on the Failure of Democracy in Post-Mubarak Egypt. Eliane’s passion for the Middle East is deeply personal: her father is Lebanese, and she spent a high school year abroad and multiple summer internships in Beirut, Lebanon.

To further her understanding of the region and finally commit to becoming fluent in Arabic, Eliane moved to Jordan in 2015 where she studied Modern Standard Arabic and conducted research at Columbia University’s Global Center in Amman. Eliane then relocated to Dubai as a management consultant for Boston Consulting Group, where she advised clients ranging from national oil company executives to senior economists at ministries of economy and planning. At BCG, Eliane helped plan an international youth conference in New York in coordination with the UN, designed her office’s engagement with a local accelerator for tech-based, early stage female-led startups as a member of the Social Impact committee, and played soccer regularly with her colleagues (including in Riyadh where she almost got arrested!). Eliane has also interned at UNAID’s Strategic Policy Directions in Geneva and New York, supporting them during the 2014 UN General Assembly. She grew up in a suburb of New York where she attended a bilingual French American school and earned her French Baccalaureate. She is a native French speaker and creatively conversational in Arabic and Spanish.