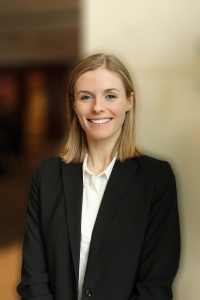 Kendall Christie graduated from the Honors College at UC Santa Barbara with highest honors and Phi Beta Kappa, earning a B.A. in Global & International Studies. At UCSB, her favorite class was a graduate seminar in Muslim Diaspora Law. Her interest in globalization and human migration brought her to Florence, Italy, where she interned at the P.A.C.I. Center for Refugees and Asylum Seekers helping newly arrived migrants from North Africa and the Middle East navigate the complex asylum processes of Italy and the E.U. and teaching english.

She continued to study the refugee crisis as a student at the Università di Bologna with coursework in sociocultural linguistics, migrant narratives, and communications. In Bologna, she interned for the International Women’s Forum, an INGO dedicated to the advancement and empowerment of expatriate women around the world. Her capstone research project explored the underlying influence of religion on reproductive rights and policy in Italy. From Italy she moved to the U.K., where she studied religion, politics, and global media at King’s College London. Since completing her undergraduate degree, she has been working as a law clerk at a mid-sized firm in the San Francisco Bay Area. She has enjoyed exposure to private practice in California but is eager to explore transnational legal careers through GLS. She speaks fluent Italian and Spanish and intermediate classroom French.