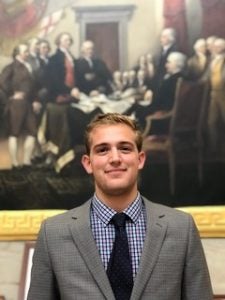 Percy Metcalfe is a 2019 graduate of the Georgetown University School of Foreign Service where he focused his studies on East and Central European politics, history and culture. Having grown up in Britain, Percy soon became interested in American politics and foreign policy after moving to DC. Alongside his undergraduate courses, he completed internships at the United States Senate, the Woodrow Wilson Center for International Scholars, and a number of DC-based journalism outfits, as well as a summer spent working in Poland at the Galicia Jewish Museum in Krakow.

Following graduation, Metcalfe relocated to Warsaw for a study/research Fulbright award, which he used to further improve his Polish language skills, continue to practice journalism, and investigate the similarities between Polish and American political culture. His project, cut short by the Covid-19 pandemic, focused on the diplomatic and cultural links between the two countries and used the evolution and politicization of the Warsaw street map as a guide. Percy is enrolled in the dual JD/Masters in Eurasian, Russian and Eastern European Studies program with the Georgetown School of Foreign Service. Percy enjoys cooking, planning road trips, and history. Percy is proficient in French and proud of his progress in Polish.