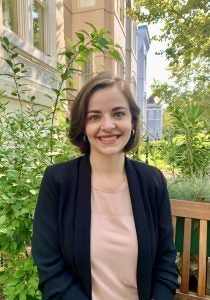 Sonia Geba graduated magna cum laude and Phi Beta Kappa from Brown University in 2017 with a degree in History, focusing on Modern Europe. She grew up in a multilingual home, speaking English, Spanish, and Ukrainian. In college, she studied Russian and interned at the Rockefeller Archive Center, where she examined partnerships between the State Department and US philanthropic organizations in response to the 1956 Hungarian Refugee Crisis. She discovered her passion for local service and human rights when she participated in an independent study focused on housing insecurity and homelessness in Providence, RI. This inspired her to join the Jesuit Volunteer Corps and work at Advocates for Children of New York upon graduating. Over two years, she assisted Spanish-speaking immigrant families in securing special education services for youth involved in foster care, immigrant students, and unaccompanied minors largely from Central America. This steeled her resolve to work at the global intersections of forced migration, education, and trauma-informed health advocacy for youth in transition.

In the fall of 2019, Sonia embarked on a Fulbright scholarship to teach English at Petro Mohyla Black Sea National University in southern Ukraine. While teaching, she organized several projects, including an HIV awareness campaign and a lecture series on special education in the US, which she delivered to several local and national institutions. She also volunteered to organize weekend arts programs for children at a village orphanage near her host city. Following her grant, Sonia completed advanced coursework in development economics through MIT’s MicroMasters program in Data, Economics, and Development Policy, which she hopes to integrate into her legal studies.

During her Fulbright, Sonia managed to visit over fifteen different cities in Ukraine and rebuild her Russian and Ukrainian language skills. Growing up between the US and northern Spain, she is fluent in Spanish and is working to refine her proficiency in French. At Georgetown, she is also a Blume Public Interest Scholar and is excited to pursue her interests in international human rights law, public interest and poverty law, and trauma-informed education and health advocacy. In her free time, she enjoys learning new dumpling recipes, gardening, and spending quality time with friends.