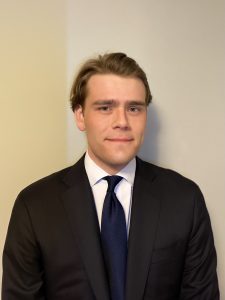 Henley was born and raised in Richmond, Virginia. An Echols Scholar at the University of Virginia, he earned his B.A. with High Distinction in 2015. He double-majored in Classics and English and also served as the Vice Chair for Investigations for the UVA Honor Committee. After graduation, he spent a year teaching Latin at Bryanston, a boarding school in Dorset, England. He then earned a master’s degree in Western intellectual history at St. John’s College in Annapolis, Maryland, studied for a professional French fluency certification in Lyon, France, and interned at an international law NGO in Washington, DC.

At Georgetown, Henley is a member of Barristers’ Council in the ADR Division and is the Development Editor for the Georgetown Journal of International Law. He has interned at the U.S. Securities and Exchange Commission and the Federal Trade Commission in addition to working as a faculty research assistant. Henley is professionally proficient in French and understands most written and spoken Spanish. He regrets that his Latin and Greek have oxidized with disuse, but he still occasionally springs unsolicited Cicero quotes on unsuspecting passersby.