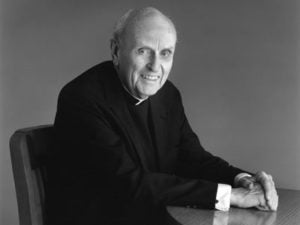 Father Robert F. Drinan, who was a professor at Georgetown Law from 1981 until his death in January 2007, was a priest, scholar, lawyer, politician, activist, ethicist and one of the nation’s leading advocates for international human rights.  He has dedicated his life to humanitarian causes and to improving the legal profession.

A leading voice in the human rights movement from more than half a century, Drinan was one of the founders of the Lawyers’ Alliance for Nuclear Arms Control and the National Interreligious Task Force on Soviet Jewry.  He was also the vice chair of the National Advisory Council of the ACLU and a member of the Helsinki Watch Committee.

Drinan served on numerous committees devoted to the furtherance of human rights and sits on the board of directors of the International League for Human Rights, Human Rights First, Bread for the World, the Council for a Livable World Educational Fund, Americans for Democratic Action, People for the American Way and the NAACP Legal Defense and Education Fund.

Drinan served as a U.S. Representative from Massachusetts for five terms (1971-1981), sitting on several congressional committees, including serving as chairman of the Subcommittee on Criminal Justice of the House Judiciary Committee.  He traveled the globe both as a member of Congress and as a private citizen on human rights missions to Vietnam, Thailand, Hong Kong, China, Japan, the Netherlands, South Africa, Sudan, Israel, the former Soviet Union, Chile, the Philippines, El Salvador, Guatemala, Nicaragua and Argentina.

The inaugural lecture for the Drinan Chair in Human Rights was delivered by Harold Hongju Koh and can be viewed here.