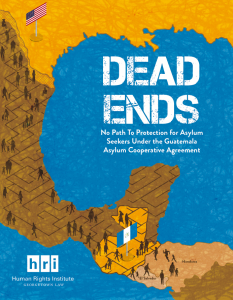 The Agreement violates U.S. and international law by denying asylum seekers a viable path to protection in the United States or Guatemala, the report finds.

Under the Guatemala ACA, signed on July 26, 2019,Honduran and Salvadoran asylum seekers who arrive at the United States southern border in search of protection are subjected to a procedure of swift removal. The Agreement denies these asylum seekers, predominantly women and children, the opportunity to lodge a claim for asylum in the United States on the grounds that they can instead seek asylum in Guatemala as a so-claimed “safe third country.”

HRI’s new report, Dead Ends: No Path to Protection for Asylum Seekers Under the Guatemala Asylum Cooperative Agreement, finds that Guatemala does not meet the standards under U.S. and international law for a “safe third country” and that U.S. and Guatemalan officials regularly engage in conduct that violates the human rights of asylum seekers.

In the United States, immigration officials disregard even the limited procedural safeguards that are supposed to be available to asylum seekers subject to the Guatemala ACA. They routinely fail to provide written notice, or in some cases any notice at all, to asylum seekers that they will be removed to Guatemala. They often mislead asylum seekers about the process and only engage in the most cursory examination of protection concerns prior to deeming the individuals ineligible for asylum in the United States.

HRI’sreport shares the first-hand accounts of many asylum seekers subjected to the Guatemala ACA. “Isabella,” a Honduran woman who fled gang violence with her husband and infant daughter, told U.S. officials:

“If you send me to Guatemala you might as well send me to Honduras, as either way we are going to be killed.”

Soon after, Isabella and her family were removed to Guatemala despite fearing for their lives.

The research gathered for the 100-page report establishes ample evidence that the asylum seekers sent by the United States to Guatemala have no viable path to protection in Guatemala. Arriving in Guatemala, ACA asylum seekers have only 72-hours decide to pursue asylum in Guatemala or return to their home country. They are provided scant information on the asylum process from Guatemalan officials and no governmental assistance in lodging an asylum claim.

The majority of people transferred pursuant to the Agreement did not feel safe in Guatemala, a country where they are likely to face the same or similar risks that caused them to leave their home country, the report says. As a result, almost all felt they had no viable alternative but to abandon their search for safety and return to their home country where they may face persecution, torture, or even death.

Asylum “not a priority” in Guatemala

The report reveals concerning gaps in protection in Guatemala’s Migration Code, significant departures from the law in practice, and a general lack of capacity to handle an influx of asylum claims. The absence of Guatemalan governmental capacity shifts the burden of providing assistance to asylum seekers to a few overstretched and under-resourced civil society organizations, who are not a party to the Agreement. This raises serious questions as to how the U.S. Department of Justice and Department of Homeland Security could have reached the conclusion that Guatemala provides “access to a full and fair procedure for determining a claim to asylum or equivalent temporary protection,” as required by the U.S. Immigration and Nationality Act.

“Asylum is not a priority for our country,” the Guatemala Office of the Ombudsman relayed. Even if Guatemala had the institutional capacity to prioritize asylum, the country is too dangerous for asylum seekers to find durable solutions there. “We’re not a safe country,” said Nery Rodenas, Director of the Office of Human Rights of the Archbishop of Guatemala. “If we have violence and people have to leave because they’re going to get killed, this is not a safe country.”

HRI’s report substantiates and compellingly expands on the findings of Deportation with a Layover, a recent report by Refugees International and Human Rights Watch.

A “dead end” for asylum seekers

“The U.S.-Guatemala ACA treats asylum seekers as if their lives are worthless,” said Claire McMullen, a recent Master of Laws graduate of Georgetown Law and one of the report’s authors.

“It is not a path to protection for Central American children and families but an unlawful, one-track return to the dangers they are fleeing,” she said. “It is not a ‘safe third country’ agreement but a dead end for the United States, Guatemala and asylum seekers and ought to be terminated immediately.”

Research for the Human Rights Institute report was conducted in Guatemala City in early January of 2020, when the United States was just beginning to increase the number of Honduran and Salvadoran asylum seekers removed to Guatemala. The research team from the Georgetown Law Human Rights Institute Fact-Finding Project conducted over fifty interviews with asylum seekers, Guatemalan government officials, members of civil society, and representatives from international organizations among others.

The report is authored by an international team of LL.M. and J.D. students: Grace Fuscoe, Teressa Hamsher, Jacqueline Lewis, Claire McMullen, Justine Tixhon, and Ashlee Uren. The research was supervised by Kacey Mordecai and Katharine Valencia, adjunct professors of law, and Melissa Stewart, the Dash-Muse Teaching Fellow at the Human Rights Institute.