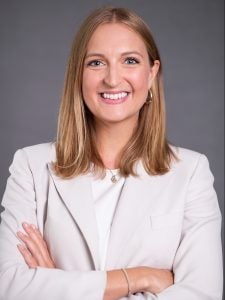 Marie spearheads the Institute’s Executive Education Programming, putting emphasis on custom designed programs that are aimed at training legal professionals; public policy officials; members of the international business, IGO, and NGO communities; academics; and others – including those from developing countries and transition economies. The Institute’s annual Global Trade Academy, a week-long boot camp offering participants an unparalleled deep dive into the most salient and complex legal and policy issues in global trade today, is a prominent example of her executive education programming.

Marie is in charge of the Institute’s external relations, while assisting in advancement efforts and student-centered fellowship certificate programs, and the execution of IIEL’s colloquium. She is also a nonresident senior fellow with the Global Business & Economics Program at the Atlantic Council, where she covers a range of topics including international trade, trade policy, transatlantic relations, and US-China relations.

Marie previously served as the deputy director of the Global Business and Economics Program at the Atlantic Council. In this capacity, she oversaw development and execution of new programming, and managed portfolios on European growth, trade, and the transatlantic relationship.

Marie was the managing editor of the Atlantic Council’s weekly newsletter “The Trade Shop,” which reached more than ten thousand people on a weekly basis. She has co-authored a report on the future of trade, published op-eds, and has led public discussions as well as live interviews with prominent transatlantic leaders on foreign policy, the transatlantic economy, and trade.

A native of Germany, Marie received her bachelor’s degree in European studies and master’s degree in international relations from Maastricht University. As part of her undergraduate study, she took courses and conducted research at Sciences Po, Aix en Provence in France.