Police for Tomorrow Fellows select and pursue capstone projects designed to allow the officers to more closely connect with D.C. communities.  Examples of these projects are described below. 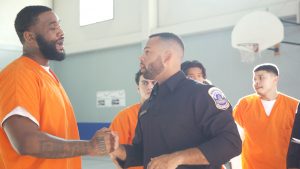 Officer Evan Douglas was inspired to pursue his capstone project because his personal and professional life experiences have made him empathetic to incarcerated individuals.

Officer Douglas wanted his fellow officers to gain a different perspective, which led him to organize a visit to D.C.’s Department of Corrections, where he facilitated a conversation between the Police for Tomorrow Fellows and incarcerated individuals of the Correctional Treatment Facility.

By using restorative justice practices, this meeting was able to help the Fellows gain empathy, build trust, and rethink the relationships between law enforcement and the community.

The powerful discussions led the DC Metropolitan Police Department to incorporate this visit  and discussion program into the Police Officer Training Academy’s curriculum. 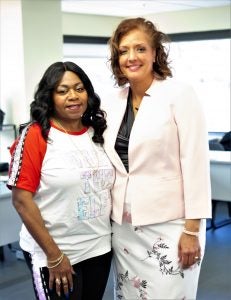 Lisa Burton describes herself as “a Black, Blue Mom of three, with two sons.” She says she was motivated to “proactively find community stakeholders who would present a platform to bridge the gaps between the police and the people.” Her goal was to protect her sons while simultaneously presenting the challenges faced by her colleagues in blue, which she says “was a delicate balance.”

This inspired Burton’s capstone project to facilitate a roundtable discussion about safe traffic stops.  Valerie Castile, the mother of Philando Castile who was killed by an officer, was the keynote speaker.  Others in attendance included the National Organization of Black Law Enforcement Executives (NOBLE), retired MPD Officials, as well a representative from the non-profit group called Moms of Black Boys United for Social Change (MOBB UNITED).

After the event, Burton was invited to become a co-leader of the DC Chapter and visionary member of MOBB, and says she “has successfully teamed up with mothers, locally and globally, to mobilize, navigate and empower our communities to unite and change the perception of our black sons. We want the world to see our sons just as we see them.”