Professor Neal Katyal is the founding Director of the Center. Before his appointment as Deputy Solicitor General on January 21, 2009, Katyal was a professor at Georgetown Law and the Director of the Center on National Security and the Law.  In 2006, he prevailed in the US Supreme Court case of Hamdan v. Rumsfeld, challenging the policy of military trials at Guantanamo Bay Naval Station, Cuba. An expert in matters of constitutional law, particularly the role of the President and Congress in time of war and theories of constitutional interpretation, Katyal has embraced his theoretical work as the platform for practical consequences in the federal courts.

Itamar Mann studies national security law, immigration, and legal theory. His dissertation explores the foundations of human rights through a history of international legal responses to “boat people” since the mid 20th century. At Georgetown, he will also be working on projects on the regulation of technology professionals developing advanced weapon systems, and on the law pertaining to hunger strikes. In 2010-2011, Itamar was awarded Yale Law School’s Bernstein fellowship for International Human Rights, and conducted field research in Greece and Turkey. Before that, he practiced as a lawyer in Israel, and was active particularly in cases concerning the rights of security prisoners, and those of detained asylum seekers. Itamar holds an L.L.B. from Tel Aviv University, where he also studied philosophy, and an L.L.M. from Yale Law School, where he is completing his J.S.D.

Stephen I. Vladeck is a Professor of Law at American University Washington College of Law. His teaching and research focus on federal jurisdiction, constitutional law, and national security law. A nationally recognized expert on the role of the federal courts in the war on terrorism, Vladeck’s prolific and widely cited scholarship has appeared in an array of legal publications—including the Harvard Law Review and the Yale Law Journal —and his popular writing has been published in forums ranging from the New York Times to BuzzFeed. Vladeck, who is a co-editor of Aspen Publishers’ leading national security law and counterterrorism law casebooks, frequently represents parties or amici in litigation challenging government counterterrorism policies, and has authored reports on related topics for a wide range of organizations—including the First Amendment Center, the Constitution Project, and the ABA’s Standing Committee on Law and National Security. He also serves on the Executive Committee of the Board of Directors of the ACLU of the Nation’s Capital.

Professor Vladeck has won numerous awards for his teaching, his scholarship, and his service to the law school. He is an elected member of the American Law Institute, a senior editor of the peer-reviewed Journal of National Security Law and Policy, co-editor in-chief of the Just Security blog, a senior contributor to the Lawfare blog, the Supreme Court Fellow at the Constitution Project, and a fellow at the Center on National Security at Fordham University School of Law.

A 2004 graduate of Yale Law School, Vladeck clerked for the Honorable Marsha S. Berzon on the U.S. Court of Appeals for the Ninth Circuit, and the Honorable Rosemary Barkett on the U.S. Court of Appeals for the Eleventh Circuit. While a law student, he was Executive Editor of the Yale Law Journal and the Student Director of the Balancing Civil Liberties &National Security Post-9/11 Litigation Project, and he was awarded the Potter Stewart Prize for Best Team Performance in Moot Court and the Harlan Fiske Stone Prize for Outstanding Moot Court Oralist. He earned a B.A. summa cum laude with Highest Distinction in History and Mathematics from Amherst College in 2001.

Jennifer Daskal joined the Center from the Department of Justice, where she served as a Counsel to the Assistant Attorney General for National Security.  She spent her first year there working on the Detention Policy Task Force.  Previously, she was the Senior Counterterrrorism Counsel for Human Rights Watch.  Prior to that, she worked as a staff attorney for three years at the Public Defender Service for the District of Columbia.  In 2001-2002, Jen clerked for Judge Jed S. Rakoff in the Southern District of New York.   Jen received a BA in history from Brown University.  She has an MA in economics from Cambridge University, England, where she was a Marshall scholar, and a JD from Harvard University (magna cum laude).  She is a Term Member of the Council of Foreign Relations. After her fellowship with the Center, Jen became an Associate Professor at American University Washington College of Law.

Justin Florence is Counsel at Ropes & Gray LLP. Previously, he worked in the White House Counsel’s Office as Special Assistant to the President and Associate Counsel to the President.  Prior to that, he worked for the Senate Judiciary Committee as Senior Counsel to Senator Sheldon Whitehouse, Chairman of the Subcommittee on Crime and Terrorism.  Before then, he was an Associate in the Supreme Court and Appellate Practice at the Washington office of O’Melveny & Myers, LLP.  He was a Fellow at the Center during its first year (2007-2008). Justin clerked for Judge Diana Gribbon Motz on the U.S. Court of Appeals for the Fourth Circuit.  He graduated from Yale law School, where he was Executive Editor ofThe Yale Law Journal. He also holds a Master’s degree in American history from Harvard University, and a BA from Yale College.

C. Jeffers Boggs is a native of South Carolina and graduated summa cum laude from Converse College with a B.A. in History and Politics and a minor in Philosophy in 2009. Before beginning law school in 2011, she worked with the National Council on U.S.-Arab Relations as a Special Projects Assistant, where she assisted in the planning of cultural excursions to the Middle East while managing the organization’s internal servers and graphic design needs. She graduated from Georgetown University Law Center in 2014, where she was a participant in the 2013 National Security Crisis Law Simulation as well as the 2014 Clara Barton International Humanitarian Law Competition. Jeffers was also a member of the GULC Pro Bono Board, a Global Teaching Fellow, a Senior Articles Editor for the Georgetown Journal of Law and Public Policy, and participated in the Community Justice Clinic. During her time at Georgetown she interned with the New Orleans Public Defenders Office, the South Carolina Attorney General’s Office, and the Philadelphia District Attorney’s Office. Jeffers commissioned as a an ensign in the United States Naval Reserves in December 2013 and is projected to go into active duty with the Naval Judge Advocate General Corps upon successfully completing her training this fall. In her spare time she is an avid runner and enjoys lobster fishing with her father’s family in the Florida Keys.

Michael Robillard is currently a resident research fellow at the Stockdale Center for Ethical Leadership at the US Naval Academy and a PhD candidate at the University of Connecticut. His work mainly focuses on theories of exploitation as they relate to military recruits as well as revisionist just war theory and its relation to future generations. Michael is a former Army Ranger and Iraq war veteran.

Jessica Wolfendale is Associate Professor of Philosophy at West Virginia University. She is the author of Torture and the Military Profession (Palgrave-MacMillan 2007), co-editor of New Wars and New Soldiers: Military Ethics in the Contemporary World (Ashgate 2011), and has published extensively on topics including terrorism, torture, the concept of security, and military professional ethics. During the 2014-2015 academic year she was a Resident Fellow at the Stockdale Center for Ethical Leadership at the United States Naval Academy. Her current research projects include a book manuscript (co-authored with Matthew Talbert) provisionally titled War Crimes: Causes, Excuses, and Blame, and a paper on sexual modesty and shame. Her most recent paper, “Provocative Dress and Sexual Responsibility” (forthcoming in the Georgetown Journal of Gender and the Law), examines the relationship between women’s sexuality, women’s clothing, and judgments about women’s responsibility for the sexual behavior of men.

While at Georgetown, Amanda worked with Professor David Cole on the litigation of several cases involving national security issues, including Humanitarian Law Project v. Holder, a First and Fifth Amendment challenge to the statute barring material support for terrorism heard by the Supreme Court, and Arar v. Ashcroft, a Bivens claim concerning rendition and torture.  Previously, she served for several years as the U.S. Program Officer for the Robert F. Kennedy Center for Human Rights.  Amanda’s academic work focuses on constitutional law, political theory, speech and association, and their intersection with the behavioral sciences, and she is co-authoring a casebook on law and terrorism.  Amanda is a graduate of Yale Law School and Yale College.

Larry Schwartztol was a visiting researcher at the Center for the Spring of 2010.  Previously, Larry was a staff attorney in the American Civil Liberties Union’s National Security Project, where he litigated cases involving foreign intelligence surveillance, ideological exclusion of foreign scholars, and the government’s search authority at airports and the U.S. border. Before that, Larry litigated school equity cases as a Karpatkin Fellow in the ACLU’s Racial Justice Program and worked on voting rights issues as a Liman Fellow at the Brennan Center for Justice at NYU School of Law.  He served as a law clerk to Judge Harry T. Edwards of the U.S. Court of Appeals for the D.C. Circuit.  Larry graduated from Yale Law School and received his BA from the University of Chicago.

Babak Siavoshy was a visiting researcher at the Center for the Fall of 2009.  Babak served as a law clerk to the Honorable John T. Noonan, Jr., on the United States Court of Appeals for the Ninth Circuit in San Francisco from 2008 – 2009.  He graduated from Berkeley Law, where he was Associate Editor of the Berkeley Journal of International Law and worked on the Berkeley Technology Law Journal. He also holds a BA in Philosophy and English Literature from U.C. Berkeley, where he served as a Graduate Student Instructor, teaching courses in the Department of Philosophy and the Department of Cognitive Science. 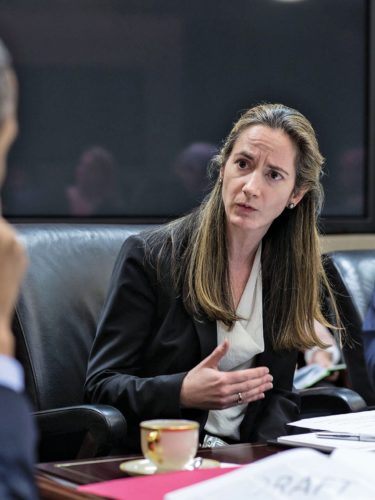 Avril Danica Haines (JD '01) was the first female White House Deputy National Security Advisor, serving in the Obama administration. She previously served as Deputy Director of the Central Intelligence Agency, as the first woman to hold this position. Prior to her appointment to the CIA, she served as Deputy Counsel to the President for National Security Affairs in the Office of White House Counsel.

In March of 2017, Ms. Haines was honored with the Alumnae Award at Georgetown Law's annual Women's Forum.