In this virtual program, Dean William M. Treanor will lead a discussion with Indian Supreme Court Justice Indu Malhotra and Professor Lawrence Gostin on the subject of Comparative Constitutional Law, with a focus on the right to health and the Constitution. 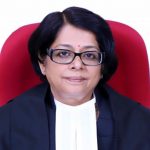 In 2007, Justice Malhotra was designated as a Senior Advocate by the Supreme Court of India. She became the second woman to be designated by the Supreme Court after over 30 years. She was appointed as Amicus Curiae in various matters. In 2018, she was elevated as a Judge of the Supreme Court, and has the unique distinction of being the first woman judge to be elevated directly from the Bar. She specializes in the field of arbitration law and has appeared in various domestic and international commercial arbitrations.

This event is co-sponsored by the Society for Democratic Rights, Georgetown Center for Asian Law, and South Asian Law Students Association.