About the 150th Anniversary Week

From October 5 to October 9, Georgetown University Law Center began a year of celebration with its 150th Anniversary Week. Daily virtual programs featured a diverse cross-section of leaders from Georgetown Law and celebrated its legacy and impact in educating lawyers for justice. 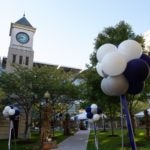 Recordings are available of all 150th Anniversary programs.

Anniversary programming is set to continue throughout the academic year. Upcoming events include virtual events focused on Georgetown Law’s history and the work of its Institute for Technology Law and Policy and Center for the Advancement of Law in the Americas (CAROLA).

Additional programs to be announced throughout the year. Programs and participants are subject to change.