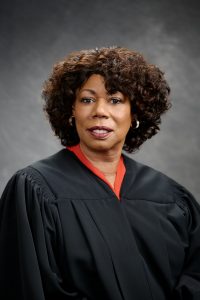 Justice Teri L. Jackson was first appointed to the California Court of Appeal, First Appellate District, Division Three, in November 2019 by Governor Gavin Newsom. The Commission on Judicial Appointments confirmed her appointment in January 2020. In August 2021, Justice Jackson was elevated to Presiding Justice of the First Appellate District, Division Five.

Justice Jackson served as an adjunct law professor at both University of California, Hastings College of the Law, and University of San Francisco School of Law.

Before her appointment to the bench, Justice Jackson worked at the firm of Orrick, Herrington & Sutcliffe, specializing in complex litigation, employer defense, real estate, trade secrets, and white collar defense. She was a prosecutor for more than 15 years, first with the San Mateo County District Attorney’s Office and then with the San Francisco District Attorney’s Office, where her last assignment was Managing Attorney of the Homicide Trial Team. She was the first woman to hold that position. She was also the Chair of the California Committee of Bar Examiners.

Justice Jackson received her B.A. in 1977 from the University of California, Santa Cruz, where she majored in politics. She earned her J.D. in 1980 from Georgetown University Law Center in Washington, D.C.