On April 8, 2021, the Georgetown Journal of Gender and the Law hosted its 2021 Symposium: The Evolution of Technology & Gender-Related Offenses. The symposium is designed to explore the changing landscape of technology and its aggravation of gendered violence and other harms. This two-part event includes a Symposium Issue (to be published in June 2021) and a Virtual Symposium Panel.

The Virtual Symposium featured two panels and an interview, each discussing timely issues in the legal field and featuring the work of our authors as well as other distinguished practitioners and advocates. 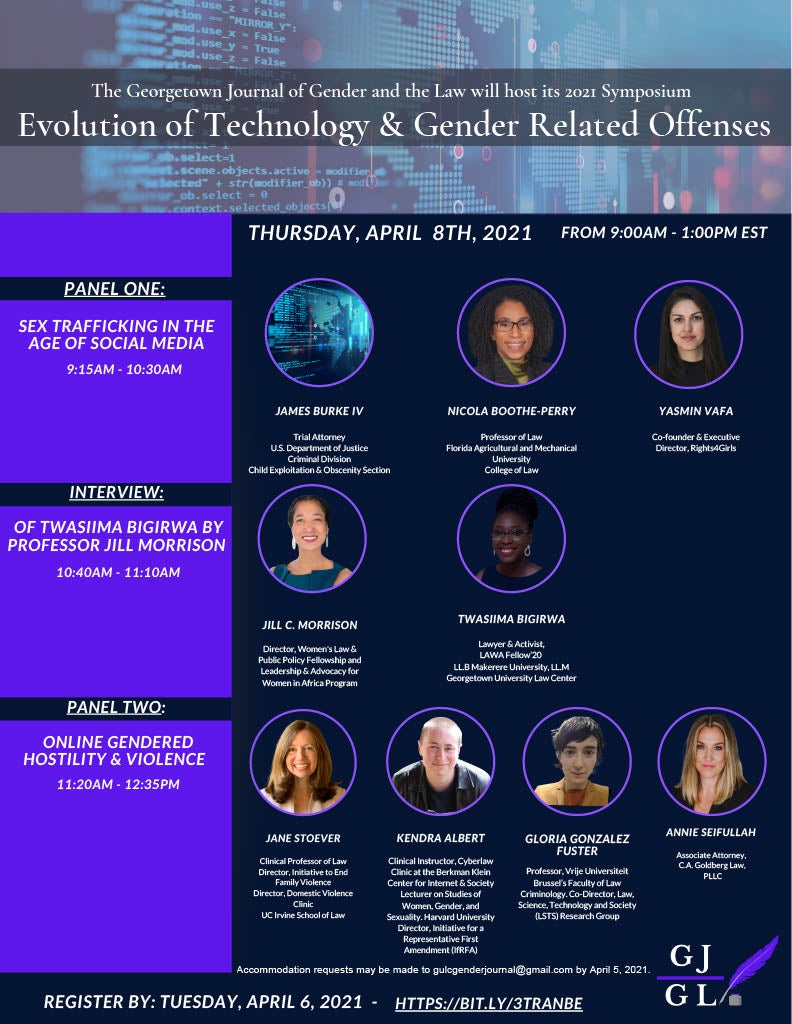 Panel One: Sex Trafficking in the Age of Social Media (not recorded)

Interview: A Conversation between Twasiima Bigirwa and Jill Morrison on Non-Consensual Image Distribution and Afro-Feminism

The Georgetown Journal of Gender and the Law hosted its 2018 Symposium: Shaping American Nationalism on November 9, 2018. This event explored the intersections of immigration law, gender, and sexuality through conversations with scholars, practitioners, and policy experts. The Keynote Address by Kroc Institute’s Erin Corcoran, L’00 focused on defining American identity in the era of President Trump. It was followed by two moderated panel discussions and the following speakers:

Panel One: The Policy and Politics of Immigration and Parenting

The Construction of The Ultimate Other: Nationalism and Manifestations of Misogyny and Patriarchy in U.S. Immigration Law and Policy
Erin Corcoran

Immigrant Women, Domestic Violence, and Hurricanes Irma and Maria in Puerto Rico: Compounding the Violence for the Most Vulnerable
Jodie G. Roure

What’s So Exceptional About Immigration and Family Law Exceptionalism? An Analysis of Canonical Family and Immigration Law as Reflective of American Nationalism
Kelly McGee