Section 8: Museum Square and the Future of Affordable Housing in D.C.

In this blog post, Staff Editor Lisa Thomas discusses how redevelopment can affect the District’s most vulnerable residents. For more on affordable housing in Washington, D.C., check out Katherine Hannah’s recent Note, Carrying Out the Promise: How Shared Equity Models Can Save Affordable Housing, on WestLaw and Lexis. 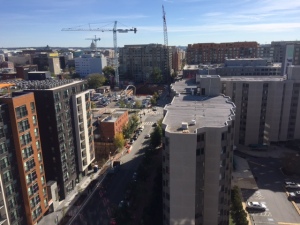 The area around Washington, D.C.’s Convention Center is a model for new development, but it also exemplifies the issues that some of the city’s most vulnerable residents are facing. Cranes appear in all directions, including the six-block area known as Mt. Vernon Triangle. Old and abandoned buildings are quickly being replaced with hotels, luxury apartments, stores, and restaurants. Museum Square, however, stands out as an exception to the new rule; currently, it is Section 8 housing on the corner of K Street NW and 4th Street NW. Many of its residents are Chinese, elderly, low income, and non-English speaking—factors that have disadvantaged them when negotiating to keep their homes.[1] The tenants at Museum Square comprise half of the remaining Chinese population in the neighborhood, just a few blocks north of Chinatown.[2]

In 2013, the owner of the Museum Square apartment building, the Bush Companies, declared that it was not going to renew the Section 8 agreement it had with the U.S. Department of Housing and Urban Development, which subsidizes the tenants’ rent.[3] In June 2014, Bush informed tenants that they could purchase the building; otherwise, the developer planned to construct two new buildings there—one with fourteen stories of apartments and another with thirteen stories of condominiums.[4] The project would also include four levels of underground parking and 17,000 square feet of retail space.[5] The residents tried to exercise their right to purchase the property, which Bush claimed would cost them $250 million.[6]

As Aaron Wiener of the Washington City Paper points out, however, both the steep price and the notice itself were problematic.[7] Besides valuing each apartment at well above other apartments in the area, the notice was erroneous. It stated in part, “THIS OFFER OF SALE IS ISSUED WITH THE INTENTION OF ISSUING A 180 DAY NOTICE TO VACATE THE HOUSING ACCOMOTATION [sic] FOR DEMOLITION PERSUAND [sic] TO D.C. CODE SECTION 42-3503.01(G)(1).”[8] Wiener points out, “There is no paragraph (g)(1) in that section of the code—and besides, section 42-3503.01 concerns a defunct tenant assistance program from 1987 that has nothing to do with the issues facing Museum Square.”[9] The errors in this notice evince the challenges tenants faced when trying to understand their options and their rights.[10] Many tenants argued that Bush was trying to confuse them into leaving their homes, in part by falsely telling them that they needed to vacate and by not delivering policy changes to them in Chinese, contrary to legal requirements.[11] Ultimately, residents took their grievances to court, noting that the building was appraised at under $70 million.[12]

The tenants won their case in the D.C. Superior Court and prevailed again in the Court of Appeals, and both courts agreed that the developer unlawfully inflated the price so that residents could not afford it.[13] Under the D.C. Tenant Opportunity to Purchase Act, when someone tries to purchase a rental building, the renters must be given a chance to purchase the property before it is put on the market.[14] In the wake of the Museum Square case, the D.C. Council passed legislation that allows tenants to obtain an independent appraisal of property where they live if that property is going to be demolished or replaced with non-residential space.[15] This law may help low-income D.C. residents avoid yet another means that property owners like Bush have tried to use in order to vacate rental properties.[16]

The residents’ fight is not over, and they now intend to purchase the property if they are given a fair price.[17] However, they still might not be able to afford it. Initially, 237 families stayed in the building when the Section 8 contract expired and used D.C. Housing Authority vouchers to cover the rent.[18] Now, only 187 families remain, and many families choose to use their vouchers elsewhere.[19] The value of the building is also likely rising with each new construction project in the neighborhood. Other tenants face a similar fate. Wah Luck House, located near Museum Square, is another Section 8 building where most of the remaining Chinese population in the area resides.[20] The building’s contract expires next year, creating uncertainty about whether more tenants will be displaced and how far they will have to go in order to find affordable housing.[21] 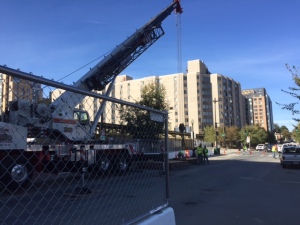 Meanwhile, developers are flooding the area, and rent in D.C. is growing at more than twice the national average at a yearly rate of 4.9 percent.[22] Across from Museum Square, along K Street NW, Quadrangle Development Corporation is building a fourteen-story apartment complex called The Lydian, which will have restaurants and shops along the ground floor.[23] Across the street is another construction site that will become Mt. Vernon Place, which will include nine buildings with over two million square feet of residential, retail, and office space, including the new headquarters of the D.C. Bar Association.[24] Also across from Museum Square is another apartment complex that opened in fall 2016, near several other new buildings and construction sites along New York Avenue. Just two blocks south of Museum Square is Massachusetts Avenue, which boasts several new apartment complexes and restaurants as well as a giant blue crane next to Georgetown Law Center that is helping workers erect a multi-story building above Interstate 395.

As the area quickly changes, the fate of Museum Square and other affordable housing remains uncertain. It is unclear what entities like the D.C. Housing Authority may do to help and how these displacements are affecting the city’s diversity, people’s access to social and cultural circles, and tenants’ employment opportunities. In 2008, one blogger from Mt. Vernon Triangle wrote, “Much of the prostitution and drug dealing in the community is in the shadows of the low income Museum Square Apartments. That can’t help but shape opinions of the building.” The author continues, “In an area like ours ideally you’d hope to see atleast [sic] one crane in the neighborhood at all times so that the next wave of progress is never too far off.”[25] It is difficult to reconcile the positives of such construction with the negatives, both in D.C. and elsewhere. As 33-year-old Museum Square resident Khea Chambers noted, “I’ve been here all my life. . . . I’ve been here when it was just dust. Who are you to tell me that it’s time to leave?”[26]

[24] Everything You Need to Know About Shaw/Mt. Vernon Triangle, Bisnow (Feb. 29, 2016), https://www.bisnow.com/archives/newsletter/local-real-estate/washington-dc/7560-everything-you-need-to-know-about-shaw-mt-vernon-triangle.