In this virtual program, Dean William M. Treanor leads a discussion with Justice Uday Lalit and Professor Neal Katyal on the subject of Comparative Constitutional Law, with a focus on the role of the judiciary branch in keeping the executive branch in check. 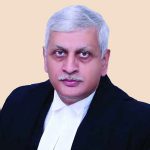 Neal Katyal serves as Paul and Patricia Saunders Professor of National Security Law and is the former Acting Solicitor General of the United States.

This event is co-sponsored by the Society for Democratic Rights, Georgetown Center for Asian Law, and South Asian Law Students Association.