The National Security Law constitutes one of the greatest threats to human rights and rule of law in Hong Kong since the 1997 handover, according to a new report by the Georgetown Center for Asian Law. The report documents the more than 100 arrests that have taken place since the passage of the law, and urges the government to stop using the NSL in ways that may violate basic human rights.

The report, Hong Kong’s National Security Law: A Human Rights and Rule of Law Analysis, finds that the new law violates both key provisions of the Basic Law, Hong Kong’s mini-constitution, and also falls short of international human rights standards. Based on more than 20 interviews with Hong Kong actors and an extensive review of the documentary record, the report concludes that, in several NSL cases, individuals seem to have been arrested merely for exercising their basic rights to free expression, assembly, and association. 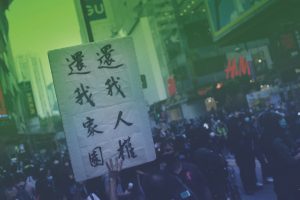 The report makes clear that the NSL is being used not just to crack down on pro-democratic activists and politicians, but also to reshape Hong Kong’s liberal political system in ways that benefit Beijing. While Hong Kong has never been a full-fledged democracy, it has long enjoyed many of the other elements of an open society, including an independent judiciary, a free press, vibrant civil society organizations, and an apolitical and professional civil service. The NSL places all of these elements of Hong Kong’s civic life at risk.

“Hong Kong is facing a real threat, not just to its autonomy, but to its way of life,” said Tom Kellogg, executive director of the Center for Asian Law and co-author of the report. “The NSL could mark the end of Hong Kong as an open society.”

Since its implementation on June 30, 2020, the law has been used in three key ways: to limit certain forms of political speech, with a particular focus on key slogans from the 2019 protest movement; to limit foreign contacts, and in particular to break ties between Hong Kong activists and the international community; and to target opposition politicians and activists, many of whom are longtime pillars of Hong Kong’s political scene.

Many of those arrested for NSL crimes will be put on trial soon, marking a potential turning point for rule of law in Hong Kong.

The impact of the NSL has been felt well beyond the more than 100 individuals who have been arrested by the National Security Department. Self-censorship has emerged as a serious problem, one that could blunt public debate in Hong Kong for years to come. At the same time, many in Hong Kong fear that the NSL will impact the day-to-day work of Hong Kong’s government bureaucracy, bending policy discussions in ways that suit Beijing’s interests.

“It’s clear that the NSL is creating a climate of fear in Hong Kong,” said Lydia Wong, a research fellow at the Center and co-author of the report. “The international community should take note, and should press Beijing to honor its promises to the people of Hong Kong.”