The right to a fair trial for National Security Law (NSL) defendants is under threat, according to a new briefing paper from Georgetown University Law Center’s Center for Asian Law (GCAL). As the first NSL trials begin, defendants have been hampered by restrictions on their core due process rights, including the right to a jury trial and the right to pre-trial release. At the same time, the selection process for judges in NSL cases raises concerns about judicial independence.

“Hong Kong’s courts are respected worldwide for their independence, their integrity, and their commitment to the rule of law,” said Thomas E. Kellogg, the executive director of GCAL and a co-author of the briefing paper. “Judges should be allowed to try these cases fairly, and to make full use of the human rights protections found in Hong Kong’s Basic Law.” 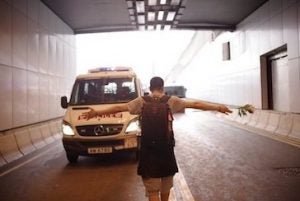 A protester tries to peacefully stop a police vehicle heading to the Legislative Council complex on June 12, 2019. Clashes between police and protesters on that day were a key turning point in the historic anti-extradition bill protests, which later led to Beijing’s decision to pass the National Security Law.

Since the NSL went into effect on July 1, 2020, the newly-created National Security Department (NSD) of the Hong Kong Police Force has arrested more than 100 individuals for alleged NSL crimes, and over 50 individuals have been charged. (GCAL’s analysis of NSL arrests over the past year can be found here; a full list of NSL arrests and charges is here.) Those charged include prominent pro-democracy politicians and advocates, as well as journalists, grassroots activists, and others. As GCAL documented in a prior report, many see the NSL as part of a larger effort to reshape Hong Kong’s vibrant political scene, and to ensure that the massive pro-democracy protest movement that emerged in 2019 never returns.

The briefing paper offers an in-depth look into the government’s aggressive approach to NSL prosecutions over the past year, documenting extensive efforts to curtail basic due process rights of those accused of NSL crimes. In general, the government has sought to deny bail to most NSL detainees, only allowing bail in a limited number of cases in which defendants agreed to extensive restrictions on their own basic rights. The government has also asserted a broad power to deny individuals accused of NSL crimes their right to a jury trial; this view was largely affirmed by Hong Kong’s Court of Final Appeal in late June.

Disturbingly, in a small number of NSL cases, questions have emerged as to whether some NSL defendants have been pressured to dismiss their chosen legal counsel, and to replace them with lawyers from the pro-Beijing camp. Any such moves by the Hong Kong government, or by Mainland officials, would be both highly unusual and deeply inappropriate.

The briefing paper, Hong Kong’s National Security Law and the Right to a Fair Trial, also takes an in-depth look at the NSD’s expanded investigatory powers under the NSL. Under brand-new Implementation Rules (IRs) issued just days after the NSL itself went into effect, the NSD has the authority to search the homes of NSL suspects, to tap their phones, freeze their assets, and to censor online speech that they deem a threat to national security. In many cases, no judicial warrant is needed, and external oversight is generally limited.