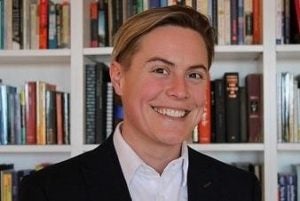 Amanda Shanor is an Assistant Professor at the Wharton School at the University of Pennsylvania, where her scholarship focuses on constitutional law, and in particular the intersection of the First Amendment and economic life. Prior to joining the academy, Shanor was a practicing lawyer in the National Legal Department of the American Civil Liberties Union, where she worked on the organization’s Supreme Court litigation. This included Masterpiece Cakeshop, a case involving a bakery that declined to sell a wedding cake to a gay couple.

Shanor has published or has work forthcoming in the New York University Law Review, the UCLA Law Review, the Emory Law Review, the Wisconsin Law Review, the Harvard Law Review Forum, and the Yale Law Journal Forum, among others. She is a regular contributor to legal blogs, including SCOTUSBlog, and the co-author of a textbook on counterterrorism law. Shanor teaches first-year Constitutional Law at Penn Law and has also taught at both Yale and Georgetown law schools.

Shanor is a graduate of Yale Law School and Yale College, and a PhD candidate in law at Yale University. She served as a law clerk to Judges Cornelia T.L. Pillard and Judith W. Rogers on the D.C. Circuit, and Judge Robert W. Sweet in the Southern District of New York.