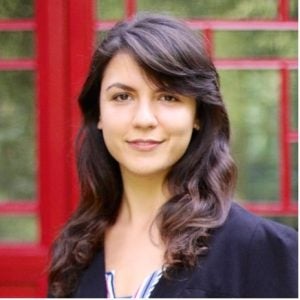 Beba Cibralic is a Ph.D candidate in philosophy and Fritz Family Fellow at Georgetown University focusing on the ethics of emerging technology, online influence, and artificial intelligence. Her dissertation examines the ethical, political, and legal status of online influence efforts. She is also co-authoring a textbook for MIT Press on the philosophy of machine agency. In 2022, Beba will be a visitor at Cambridge University’s Leverhulme Centre for the Future of Intelligence, and at Australian National University’s Humanising Machine Intelligence Project.

Previously, Cibralic worked at the Center for Security and Emerging Technology (CSET) on AI and national security, and at Ethics Lab, Kennedy Institute of Ethics, on technology ethics. She has also participated in the Stanford US-Russia Forum, where she researched US-Russia cyber cooperation. Before beginning her PhD, Beba conducted policy research at Justitia (Copenhagen) on human rights, free speech, and international law, and at the Lowy Institute (Sydney) on Southeast Asia, the Indo-Pacific, and Russian foreign policy in Asia.