We believe in the value of state and local approaches to solving hard public policy problems. And where Georgetown Law graduates go, excellence goes, too.

At SALPAL, we give our students access to law school course offerings on state and local government law and policy. We help students seeking clinical opportunities, externships, summer positions, and career opportunities in state courts, state legislatures and executive agencies, and associations.

We provide a Washington, DC-based forum for state and local government stakeholders and intergovernmental affairs experts.

Launched in 2019, we encourage you to reach out to us to learn more about our future plans.

The US Supreme Court has agreed to consider the inde­pend­ent state legis­lature theory in the case Moore v. Harper, a case decided as Harper v. Hall in the North Carolina Supreme Court. ISLT would cause signi­fic­ant disrup­tion to Congressional elections and the Presidential election by poten­tially nulli­fy­ing state consti­tu­tional provi­sions regard­ing federal elec­tions. State consti­tu­tional bans on gerry­man­der­ing in Florida, Ohio, North Carolina and other states could die, as could inde­pend­ent redis­trict­ing commis­sions in Arizona, Cali­for­nia, Michigan and other states. Join us for a conversation about ISLT with two experts: Professor Richard Pildes the Sudler Family Professor of Constitutional Law at the New York University School of Law and Carolyn Shapiro, Professor of Law and Associate Dean of Academic Administration at Chicago-Kent College of Law. 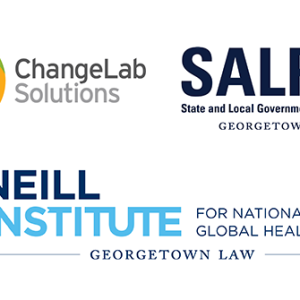 Preemption and Policymaking in Public Health Law: From Local to Global

The doctrine of preemption means that a higher level of government (e.g., federal or state government) may limit or eliminate the power of a lower level of government (e.g., state or local government) to regulate a specific issue. On its face, preemption is a neutral legal concept, but in the past decade, preemptive laws have been used with increasing regularity to thwart local policymaking that promotes health and advances equity.

This 90-minute webinar — presented by ChangeLab Solutions, the Georgetown Project on State and Local Government Policy and Law, and the O’Neill Institute for National and Global Health Law — introduced viewers to the roles of various levels of government in public health policymaking and the ways that preemption is interfering with local democratic processes.

The webinar featured keynote remarks by Dr. Jewel Mullen, followed by three panel discussions. The first panel explored recent trends in preemption, their origins, and how they relate to the advancement of health equity. The second panel considered transnational perspectives and discuss how public health authority is allocated between levels of government in other regions. The third panel examined preemption in the context of harm reduction efforts.

Find the recording, along with an introduction from Professor Meryl Chertoff, by clicking the link above.

Next week, SALPAL will co-sponsor an event with the Georgetown Global Cities Initiative, hosting Mayor Trzaskowski and moderated by Professor Uwe Brandes. Click the event title to RSVP.

SALPAL hosted an event for Georgetown Law students to learn more about the work that state attorneys general do in their offices, focusing on regulation of non-profits and charities. Featuring former New Jersey AG Peter Harvey and current Assistant Attorney General Leonor Miranda with the Office of the Attorney General in DC, students were able to ask questions about this work and gain valuable insight about public service in state government.

Professor Chertoff's latest article appears in the Albany Law Review. It covers the legacy of Justice Sandra Day O'Connor in the realm of federal commandeering and the Tenth Amendment. "Unlike the originalist Scalia, her analysis in these cases is not focused on the reasoning of the Framers, but on their intent: to maximize the ambit of independent policy-making authority of state governmental units, cabined by accountability to voters."

The article examines Justice O'Connor's opinions in the area, opinions that built on her work after her retirement, and recent cases brought by subnational governments to push back against federal overreach, specifically immigration policies implemented by the Trump Administration, which are built on the foundation laid by Justice O'Connor. The importance of state and local legal action is highlighted by these vital cases.

Professor Chertoff has co-authored a new article on state pre-emption of local policy, published by Governing. Focusing on an unfolding case in California, where one locality is fighting the state's prohibition on new sugary drink taxes, the article examines local democracy, public health, and the conflict between state and local goals.

LabGov, Co-Cities, and the Urban Commons with Sheila Foster

In this episode of Cities@Tufts, Prof. Sheila Foster, SALPAL Faculty Advisor, discusses her work with LabGov, Co-Cities, and how urban commons can be created and sustained in different political, social, and economic environments. Cities@Tufts Lectures explores the impact of urban planning on our communities and the opportunities to design for greater equity and justice.

SALPAL is delighted to welcome Kathryn Randolph, Georgetown Law '21 as our inaugural State and Local Justice Fellow. A graduate of New York University (A.B. '16) Kathryn worked in field organizing with Clean Water Action in Michigan prior to entering law school. There, she focused on state-level issues ranging from promoting a statewide septic code to shutting down an outdated oil pipeline violating its easement. Her work with CWA to shape environmental policy in her home state led to her interest in state law and election law.

During law school, Kathryn worked with Represent Us, a non-profit tackling election reform and anti-corruption measures, and with the Federal Trade Commission's Consumer Protection Bureau. She was also a short-term fellow with the Washington Bureau of the Nation Urban League, working with the Equitable Justice team to monitor developments in federal courts, advocate for policy changes in federal agencies, and collaborate with other civil rights organizations in promoting voting rights. Her research focus at SALPAL will include election law and administration in the states.

SALPAL invites you to submit articles for publication on our site. Articles should be in line with SALPAL's mission and scholarly focus. SALPAL is soliciting articles in the following subject areas: COVID-19 and the States; Elections, Voting Rights, Redistricting and Gerrymandering in the States; Racial Justice and Equity Issues for States and Cities; Climate Change and the States; Strengthening City Power (the role of cities on the global stage); Preemption of City Authorities by States. We look forward to your thought-provoking pieces!