Preemption and Policymaking in Public Health Law: From Local to Global

Hosted by SALPAL, ChangeLab Solutions, and the O'Neill Institute for National and Global Health Law

On June 7th, SALPAL joined with ChangeLab Solutions and our Georgetown Law colleagues at the O’Neill Institute for National and Global Health Law to host a webinar on preemption and public health, focusing on state preemption of local activity.

The webinar featured keynote remarks by Dr. Jewel Mullen, followed by three panel discussions. The first panel explored recent trends in preemption, their origins, and how they relate to the advancement of health equity. The second panel considered transnational perspectives and discuss how public health authority is allocated between levels of government in other regions. The third panel examined preemption in the context of harm reduction efforts.

Prior to the webinar, SALPAL posted a brief explainer on public health and preemption, by State and Local Justice Fellow Kathryn Randolph. The explainer touched on the ways in which state-level preemption of local public health efforts has shaped government responses to issues ranging from tobacco use to air quality and safe drinking water. While the COVID-19 pandemic highlighted preemption conflicts in public health, the underlying challenges predated the pandemic and will persist beyond the pandemic response.

Professor Meryl Chertoff delivered brief introductory remarks, which we have lightly edited and included below.

Why has preemption become such an important challenge in public health law innovation for local governments around the nation? That is the question that SALPAL, ChangeLab Solutions and the O’Neill Institute for National and Global Public Health Law chose to focus on for this webinar, and it is an area that each co-sponsor has delved into from a legal and policy perspective, looking at at the evolving legislative landscape, at US trends in transnational perspective and at specific case studies, as in the case of harm reduction.
As a refresher, the preemption doctrine refers to the idea that a higher authority of law will displace the law of a lower authority of law when the two authorities come into conflict. While most often discussed in the context of federal preemption of state law, it may also be exercised by state governments with respect to their subdivision Typically three types of conflicts exist regarding preemption: outright conflict – when an ordinance directly opposes a state law; express preemption – the state law directly opposes a local power; and implied preemption – which occurs when one of three things happens: the local ordinance prohibits an act permitted by the state legislature, the local ordinance permits an act prohibited by the state legislature, or finally, when there is clear legislative intent that the “field” is preempted by state law.
The Trump interlude in governance raised the profile of preemption as a tool of coercive federalism, as battles over funding for programs like the Byrne Justice Assistance Grants were held hostage in battles to enforce Trump era immigration and criminal justice priorities. At SALPAL, we also began to see use of what scholars like Rich Briffault called punitive preemption being used by state governments as a cudgel over local policy—cities and counties. State governments used preemption to impose statewide policy in areas from mask mandates to vaccination in COVID; to take away the ability to require paid parental and sick leave; to reach into local law enforcement budgets if funds were being redirected to mental health services; to take away the ability of local governments to ban natural gas in new residential construction or regulate firearm possession; to dictate what could and could not be taught about family difference in local classrooms and to deprive municipalities of the ability to impose sin taxes, including local taxes on sugary beverages.
Our colleagues at ChangeLab say preemption is neither good nor bad—an exceptionally candid statement since we are all instrumentalists when it comes to preemption. Nobody in the public health law and policy community likes the idea of Second Amendment sanctuary cities; nobody wants communities to be able to opt out of statewide childhood vaccination mandates—an idea that is picking up steam in states like Ohio and Pennsylvania. But one person’s meat is another’s poison, and there are fellow Americans who view these issues from a diametrically opposite perspective—and they vote, too.
I teach law students; and when I teach, my ethical and pedagogical obligation is to seek neutral principles. When it comes to preemption, that means asking the question: what level of government is most competent to make a decision? Do charter cities, usually the larger cities in a state, get any special treatment under their constitutional and statutory home rule powers—do they get more autonomy, since they represent a larger percentage of the populace? In practical effect, often it is the opposite that happens—rural communities that are over-represented in state legislatures tend to tyrannize cities—or governors have imposed their will by EO in emergency, contrary to the more public health protective stance of large cities. Should preemption operate only as a floor, with local governments able to ratchet up? What about direct democracy tools—can initiative and referendum blunt some of the worst aspects of punitive preemption? The audience for this webinar may be lawyers, or law adjacent public health professionals. We are providing some reading suggestions from scholars including Richard Briffault, Nestor Davidson, Rich Schragger, Miriam Seifter and Kellen Zale, all of whom write for us at SLoGLaw Blog, a new blog on state and local government law begun this year.
ChangeLab has been in the forefront on thinking about preemption in the public health law, and we were particularly excited about the work lawyers like Sabrina Adler did to challenge the ban on local soda taxes through constitutional litigation in the Cultiva La Salud case. Our colleagues at the O’Neill Institute on National and Global Health at Georgetown Law, have been studying specifics—Sonia Canzater and her team on harm reduction, others on COVID, and others on a variety of chronic diseases. And finally, as we keep seeing when it comes to pandemics, we are all tied together in a connected world by easy travel, so must look globally, as well as locally. And that is not merely defensive—nations around the world are developing best practice models on preemption—and subsidiarity—that we ignore at our peril. Renu and her panel will open a lens on that.
Finally, a word on one of our focus areas at SALPAL: state constitutions as a place to look for rights in our new era of shrinking federal due process guarantees and deference to federal administrative agencies. We’ll need state courts, empowered state agencies, and better-informed state legislatures, and that’s why all of us need to understand preemption, and its benign alter ego, home rule, better

The webinar is available in its entirety in the video here: 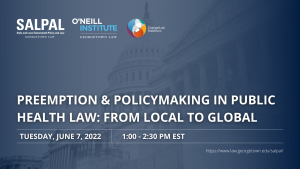 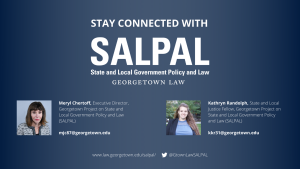