The Georgetown Law Journal is headquartered at Georgetown Law in Washington, D.C. and has published more than 500 issues since its inception, as well as the widely used Annual Review of Criminal Procedure (ARCP). The Journal is currently, and always has been, run by law students.

Volume 1, Issue 1 was published in November 1912, under the supervision of Editor-in-Chief Eugene Quay. At the time, an annual subscription to the Journal cost one dollar. The first article was titled “The 125th Anniversary of the Drafting of the Constitution of the United States.”

Today, the Journal employs approximately 120 law students—about 60 in their graduating year who serve in editorial positions and 60 in intermediate years who serve as staff. The staff collect and check sources, performing technical edits and checking for typographical errors. The upperclass students are tasked with administering the Journal’s daily operations.

An example of the Journal’s work includes its Annual Review of Criminal Procedure, which has an annual distribution of over 20,000 copies. As a comprehensive survey of all criminal procedure in the federal courts, the ARCP is a useful resource in many district courts, U.S. Attorneys’ offices, the Criminal Division of the U.S. Department of Justice, a large number of law firms, and prison libraries. 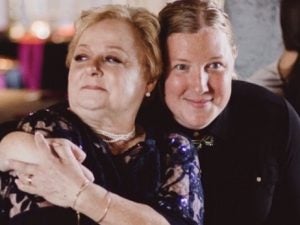 Jennifer's powerful words from her time serving as a Captain in the U.S. Army can be found in the link below.

For the first time, flagship law journals at top U.S. law schools are all led by women, By Ann E. Marimow, The Washington Post

Volume 109 Senior Board welcomed Agnes Lee, Volume 110 Editor-in-Chief, on January 16, 2021! Agnes will be GLJ's first openly undocumented EIC. We are certain that she will lead us with grace and humility.

Volume 109 Senior Board held its first meeting of the semester on March 27, 2020 over Zoom.

Volume 50 ARCP editors bonded together at District Winery early in the spring semester.

Several members of the Volume 109 Senior Board met for a potluck at Editor-in-Chief Toni Deane's apartment on February 28, 2020.

The podcast will be moderated by GLJ Articles Committee editors, Max Crema and Nathan Garg.

GLJ partnered with the O'Neill Institute for the Symposium entitled, "The Law and the Nation's Health," with a focus on the following three topics: (1) The Affordable Care Act 10 Years On; (3) The Law of Women’s Heath and Equity; and (3) Health Crises in International Health Law.