Corporate America Says Black Lives Matter. It Needs to Hold Up a Mirror.

“Giving money away is definitely much easier than addressing these issues internally. It’s corporate P.R., because it transfers the responsibility of solving the problem to outside organizations. If they are generally opposed to racism, they should hold up the mirror to themselves.”, said Jamillah Bowman Williams

"As front-line workers, from emergency room staff to grocery store clerks, face an elevated risk of contracting COVID-19, they have little in the way of regulatory protections to fall back on. Democrats’ efforts to move worker protections through Congress have so far been stymied, and a regulatory process launched by the Occupational Safety and Health Administration to mandate protections from infectious disease exposure was back-burnered by the Trump administration."

"The deal is a big win for the musicians, said Mark Gaston Pearce, executive director of the Workers Rights Institute at Georgetown University Law Center and former chairman of the National Labor Relations Board. In his view, the furloughs violated both the collective bargaining agreement and national labor law.

“The union had them over a barrel. If they lost, the musicians would be entitled to back pay plus interest. That allowed them to engage in some bargaining,” he said. “The musicians were able to negotiate some concessions which will help out the Kennedy Center and gain the added stability and security of another year [on the current contract].”

Pearce said the arts center’s decision to furlough before negotiating could have been an intentional gambit by Rutter. “It certainly had a lot of shock value. Her technique might have been to punch the union in the face to see if they would fold and give up more than they would have otherwise,” he said. Instead, he said it created an opportunity for the union."

"As part of an unprecedented $2 trillion stimulus bill expected to pass the Senate on Wednesday night, many Americans experiencing financial hardship due to COVID-19 will soon be eligible for a $1,200 check and expanded unemployment benefits. But despite promises from Democratic congressional leaders, the sweeping legislation will leave behind some of the country's most vulnerable residents: undocumented immigrants and mixed status families."

"Moving forward, the Council [of the District of Columbia] will pass additional COVID response measures as needed to respond to the crisis. The measure passed at the most recent meeting was comprehensive, but is not intended as the final word on the topic."

“Our members are on the front lines of the coronavirus outbreak and they need our financial support,” Chorpenning said. “They are performing an essential role during this crisis, and they must be able to do their jobs to meet the explosive demand for health and food.”" 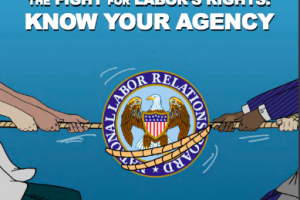 We Cannot Turn Our Back on the National Labor Relations Act

"Although union density has diminished, workplace inequities have caused workers' desires for union membership to grow. And while anti-labor sentiment has seemingly been institutionalized, it is losing ground in the court of public opinion." — Mark Gaston Pearce, WRI Executive Director 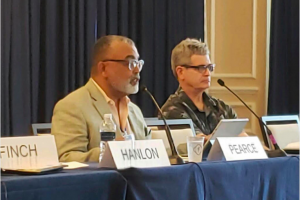 2020 Committee on Practice & Procedure Under the NLRA

WRI Executive Director Mark Gaston Pearce traveled to the ABA Labor and Employment sections' conference in San Juan, PR to speak before experts in the field on how the new NLRB election rule will cause more challenges to workers' ability to organize.

The PRO Act proposes to expand the NLRB's ability to offer workers compensation for harms suffered, to make injunctive relief in the event of employer unfair practices mandatory instead of optional, to create an avenue for workers to bring a civil action in Federal court, and to make joining a Union and negotiating a first contract substantially easier.

WRI Executive Director Mark Gaston Pearce offered testimony to the House based on his own experiences as Chairman of the Board. He emphasized the importance of reevaluating the procedural difficulties and the limitations that have impeded the NLRB from fulfilling the NLRA's dual mission to make harmed workers whole and to deter future unlawful conduct by employers.

“As the Board’s experience in Pacific Beach Hotel shows, when employers discover that the cost of noncompliance is so low, they sometimes violate the law frequently over the course of many years. It isn’t difficult to understand why.” — Mark Gaston Pearce on the remedial limitations of the NLRB.

Upcoming Events
To be posted soon.

Upcoming events will be posted here as they are scheduled. Check back in to stay up to date on our future engagements.