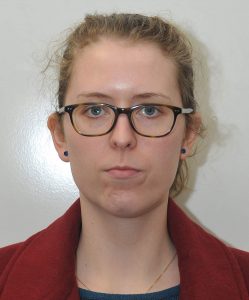 Taylor Brandt was born in raised in Arlington, Virginia. She attended James Madison University and earned a BS in Justice, with a focus in Crime and Criminology. While attending JMU she worked for their Department of Public Safety’s Cadet Program, ultimately becoming their training supervisor.

She joined the Metropolitan Police Department in December 2019 and is currently enrolled in the Academy, with an expected graduation date of August 2020. In her free time, she enjoys traveling, gardening, and enjoying the outdoors. 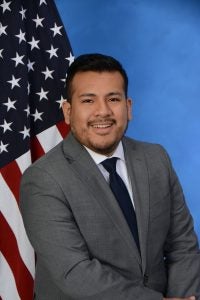 Juan Cruz was born in Lima, Peru, and raised in Maryland. While in high school, he was an intern for Montgomery County, where he first learned the value of public service through science and research. This led him to complete a Bachelor’s Degree in Geography and a certificate in Geographic Information Systems. Juan was drawn to the mixed method approach of geography and the data analysis of GIS given the importance of both in decision-making.

After earning his B.A., Juan stayed at University of Maryland Baltimore County to attend graduate school while working full-time for an immigrant advocacy organization, obtaining his M.S. in Geography. This experience was rewarding for him as he worked with staff, government officials, and community partners on multiple programs. Immigrant advocacy also shaped Juan’s understanding of the role that research and data science can play in social change.

Juan’s personal mission is to bring together data and social science in order to make better data-driven decisions. He also has a passion to see stronger bonds between grassroots organizations and local governments. In August of 2019, Juan joined the Metropolitan Police Department to continue his desire to serve the public and contribute to the future of law enforcement and community policing. Today, Juan and his wife April are the happy parents of their baby boy and spend most of their weekends with family and friends. 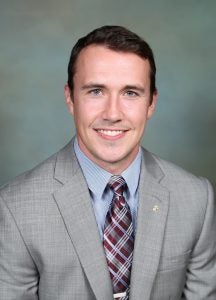 Robb Davies is a Sixth District reserve officer and joined the Metropolitan Police Department in 2018.

He grew up in the Pacific Northwest and attended the University of Washington while serving in the U.S. Marine Corps Reserve, including deployments to Iraq and Afghanistan. Robb moved to the District in 2015 to work on national security policy in the U.S. Senate, and later worked in the information technology field. He attended night school at American University Washington College of Law, concentrating in trial advocacy and criminal law.

As a clinical student he represented indigent criminal defendants, an experience he credits with a more holistic understanding of criminal justice. Robb lives in Ward 8 and is pursuing a service-oriented legal career. He thanks the District and MPD for the unique opportunity in the Reserve Corps to meaningfully serve his fellow residents. 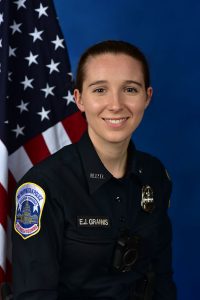 Elizabeth Grannis was born in Washington, D.C., and grew up in the surrounding areas. She studied Classics and History at Georgetown University, and initially planned to pursue an archaeology career. However, a college internship in the Third District Detectives Unit sparked her interest in law enforcement.

After graduating from Georgetown in May of 2018, Elizabeth immediately joined the Metropolitan Police Academy and graduated in March of 2019. She is now a patrol officer in the Seventh District. One of her favorite assignments at the Seventh District has been a weekly community event at a local recreation center, where Elizabeth has had the opportunity to work on improving community relations. In her free time, she likes to swim, travel, and hike in Virginia and Maryland’s beautiful state parks. 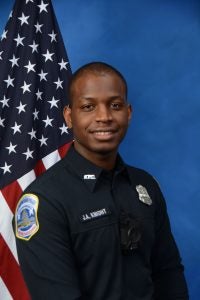 Jamid Ali Knight was born in Newark, New Jersey. He studied Education and Sociology at California University of Pennsylvania, and joined the Metropolitan Police Department in July 2019.

Previously, he worked as a corrections officer at Lehigh County Jail in Allentown, Pennsylvania, and as a flight attendant based out of Chicago, Illinois. Jamid has a passion for providing opportunities to children in underserved communities and assisting individuals in times of need. 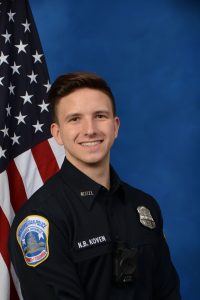 Nicholas Koven was born and raised in Brooklyn, New York, and earned Bachelor’s Degrees from the University of Maryland in Criminology & Criminal Justice and Psychology.

He spent three years volunteering as a violence prevention educator and victim advocate, facilitating discussions to prevent power-based violence and support those who have been impacted.

In 2017, Nick helped create and lead the Metropolitan Police Department’s Domestic Violence Liaison program, an initiative that trains volunteer Liaisons to work alongside officers and provide support and resources to survivors of domestic violence. Nick is an officer in the Fifth District and uses his background to better-serve the community. Nick lives in Washington, D.C., and spends his free time going to the gym and exploring the DMV’s bike paths. Also, Nick is always looking to plan his next scuba diving trip and add a stamp to his passport. 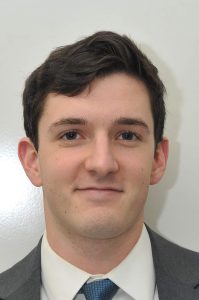 Daniel O’Rourke was born in Baltimore City, Maryland. Before starting his undergraduate studies at American University in Washington, D.C., he completed his first internship assisting prosecutors in the Baltimore County State’s Attorney’s Office. Developing a passion for criminal justice, Daniel continued interning throughout his college career. He held various roles at the Baltimore City Public Defender’s Office and the Department of Justice Environmental Crimes Section.

During his sophomore year, Daniel was introduced to the D.C. Metropolitan Police Department (MPD) where he interned with the Sexual Assault Unit and Homicide Branch. He went on to complete internships conducting investigative tasks for the D.C. Public Defender Service and INTERPOL Washington. In the fall of 2018, Daniel returned to MPD, as a volunteer Domestic Violence Liaison, Background Investigator, and Community Engagement Police Ambassador. 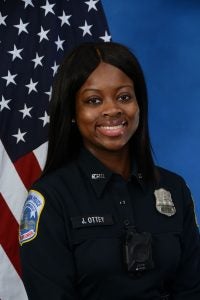 Janai Ottey lived in Union, New Jersey, for approximately eighteen years before recently relocating to Washington, D.C. She graduated from Rutgers University in Newark, New Jersey, in May 2018 with a Bachelor of Science in Criminal Justice and a minor in African American studies. After obtaining her degree, she moved to Washington, D.C., to pursue her career in law enforcement with the Metropolitan Police Department.

In September 2019, she graduated from the Police Academy and is now a patrol officer for the Fourth District. Janai is excited to see where her career path with MPD leads her. One of her goals is to work with the Youth Division to help build a connection with the next generation of the city. During Janai’s leisure time, she travels back to New Jersey to visit family and friends and she also spends time exploring Washington, D.C., to experience what the city has to offer. 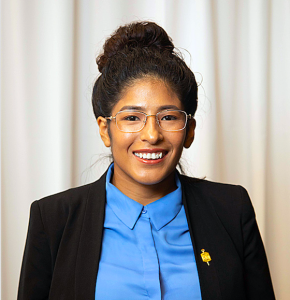 Zurisadai Perez was born in Fresno, California, and raised in Grand Island, Nebraska. As a proud daughter of Mexican immigrants, her everyday motivation is rooted in cultural acceptance and inclusiveness. Her family’s experiences with law enforcement shaped her interest in criminal justice and her commitment to elevating the voices of underserved communities. During her undergraduate career at the University of Nebraska-Lincoln, she pursued a Bachelor’s in Criminology and Criminal Justice, focusing her research on reformations of the criminal justice system and sentencing disparities.

Zurisadai is currently a second-year graduate student at the Elliott School of International Affairs at The George Washington University, where she is pursuing a Master of Arts in Security Policy Studies. She recently joined the Metropolitan Police Department in August 2019 and is assigned to the Fourth District. Before joining the department, Zurisadai’s passion for public service was strengthened through her internship at the Lancaster County Public Defender’s Office. 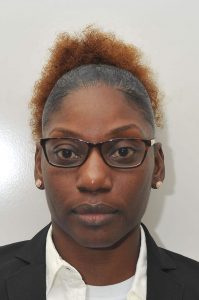 Virginia D. Spooner was born and raised in Port-of-Spain, Trinidad and Tobago, and migrated to New York in 2001 at the age of 17. After working for Aviation Security at JFK Airport, she developed an interest in the field of security and protection. Also, having children of her own, she found a love for working with youth, which led her to joining the NYPD Division of School Safety.

For a decade, Virginia was employed in the security field at Yankee Stadium, where she reached the level of security coordinator of special events. During her work with the Yankees organization, which partners with many community-based organizations, Virginia found that giving back to the community was the most rewarding aspect of her employment. She then pursued her dreams of helping the community and providing safety by joining the Metropolitan Police Department as an officer and relocating to Washington, D.C. 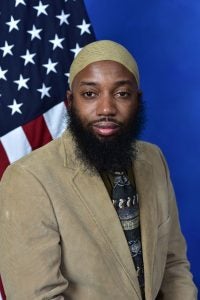 Mark Timberlake was born and raised in Washington, D.C. Due to his own experiences, Mark made a conscious decision to devote his life to the service of underserved communities. He has worked in D.C. Government since 2004 with a focus on promoting positive change and empowering young people and their families to write new chapters in their lives. In his role with the Mayor’s Office of Neighborhood Safety and Engagement, Mark worked with families and individuals who lost loved ones to homicide. He then joined the Metropolitan Police Department Victim Services Branch as a Victim Specialist in 2019, providing expertise in supporting residents and visitors who have been impacted by crime in the city.

Mark was honored by Chief Charles Ramsey in 2006 for supporting the Metropolitan Police Department during the “40 Days of Increased Peace/ Safe Summer” initiative. Mark also received recognition from Mayor Anthony Williams for being a part of the District’s response to New Orleans by helping those who were impacted by Hurricane Katrina.

When he is not working, Mark enjoys spending time with his seven children. He also enjoys travelling and meeting others who are in service to their communities. 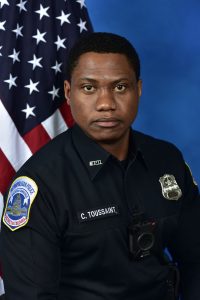 Claudy Toussaint was born and raised in Port-au-Prince, Haiti. After he immigrated to the United States, he joined the United States Marine Corps and deployed to the Middle East with the Special Purpose Marine Air Ground Task Force (SPMAGTF) in 2015. Claudy received his bachelor’s degree in Homeland Security and Emergency Management at the American Military University. Thereafter, he attended the School of Public Affairs and Administration and received a Master’s degree in Public Administration with a concentration in Technology and Information Management at Rutgers University in Newark, New Jersey. While attending Rutgers University, Claudy was selected for the 2016-2017 Rutgers Graduate Homeland Security Fellowship Program with the Rutgers Institute for Emergency Preparedness and Homeland Security.

After graduating from Rutgers University, Claudy was employed with the IT department at PSEG/Energy Resources and Trade Office in New Jersey. Claudy’s passion for public service and law enforcement led him to the Metropolitan Police Department in December 2018, where he is currently serving as a patrol officer with the Sixth District. He enjoys his current assignment as a patrol officer and looks forward to using his technological knowledge to support innovative policing strategies. His long-term goal is to serve in a leadership position with the Metropolitan Police Department Homeland Security Bureau. Outside of work, Claudy likes to spend time with his family and work on emerging cloud computing technologies on Amazon Web Services. 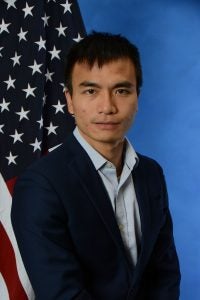 Bin F Zheng is a resident of Ward 1 and a recent D.C. transplant from New York City. He holds a B.A. in Spanish from Middlebury College and a Master of Arts in Law and Diplomacy from the Fletcher School. Prior to joining the Metropolitan Police Department (MPD), Bin built a strong track record of community engagement and advocacy within the government and nonprofit sectors, working on urban issues such as youth employment, alternative transportation, community forestry, and inclusive public green spaces.

Bin joined MPD in early 2019 where he works on a variety of management consulting, human-centered design, and evaluation projects. He is also a Fellow at The Lab @ DC, an applied science team based in the Office of the City Administrator that uses social science research methods, data science, and human-centered design to inform important decisions for the District.

Bin is committed to making cities better for all residents. In his free time, he aspires to be the best rock climber he can and he also enjoys biking, hiking, playing ultimate frisbee, and meandering through DC’s walkable neighborhoods.