The 2021 Thomas M. Cooley Book Prize of $50,000 will be awarded to Professor Sean Wilentz of Princeton University for his book, No Property in Man: Slavery and Antislavery at the Nation’s Founding (Harvard University Press, 2018).

The Center for the Constitution established the Thomas M. Cooley Book Prize, Symposium & Judicial Lecture to recognize exceptional books written that advance our understanding of, and commitment to, our written Constitution. The Cooley Book Prize, Judicial Lecture & Symposium honors the renowned legal scholar and jurist Thomas McIntyre Cooley. Cooley was a longstanding chief justice of the Michigan Supreme Court, and a professor at the University of Michigan Law School, where he also served as the dean. He authored several highly influential books, including A Treatise on the Constitutional Limitations Which Rest Upon the Legislative Power of the States of the American Union. Our two-day conference begins with the Cooley Judicial Lecture delivered by a federal judge. The next day, a day-long invitation-only symposium will be held among constitutional law professors from area universities, who will discuss critical papers written by scholars about the award-winning book.  The award winner will join these scholars to discuss the issues raised by the book and papers, which will be published in a special issue of the Georgetown Journal of Law & Public Policy.

The 2021 Thomas M. Cooley Book Prize of $50,000 will be awarded to Professor Sean Wilentz of Princeton University for his book, No Property in Man: Slavery and Antislavery at the Nation’s Founding (Harvard University Press, 2018). The Center’s faculty director, Georgetown Law Professor Randy Barnett, explained the decision:

Sean Wilentz’s timely book strikes at the now-conventional wisdom that the U.S. Constitution endorsed slavery or “property in man.” Wilentz describes how the adoption of the Declaration of Independence in 1776 propelled a powerful antislavery movement. Wilentz meticulously shows that antislavery forces at the Constitutional Convention successfully resisted slaveholders’ persistent efforts to include language that would expressly legitimate the concept of “property in man.”

He then traces how the wording of the Declaration and the Constitution were effectively used by an increasingly assertive antislavery movement in the 19th Century. This agitation culminated in the formation of the antislavery Republican Party with a platform consciously designed to implement the Declaration’s principles while remaining faithful to the Constitution’s text. The victory of the Republican platform at the polls in 1860 immediately triggered Southern secession and the civil war that culminated in the formal amendment that ended slavery in the United States. This is a narrative that all Americans today need to know.

The 2021 Thomas M. Cooley Judicial Lecture with the Honorable Neomi Rao of the U.S. Court of Appeals for the D.C. Circuit has been postponed until the event can be safely held in person. We will make an announcement once a new date has been selected. We look forward to hosting this event in the future. 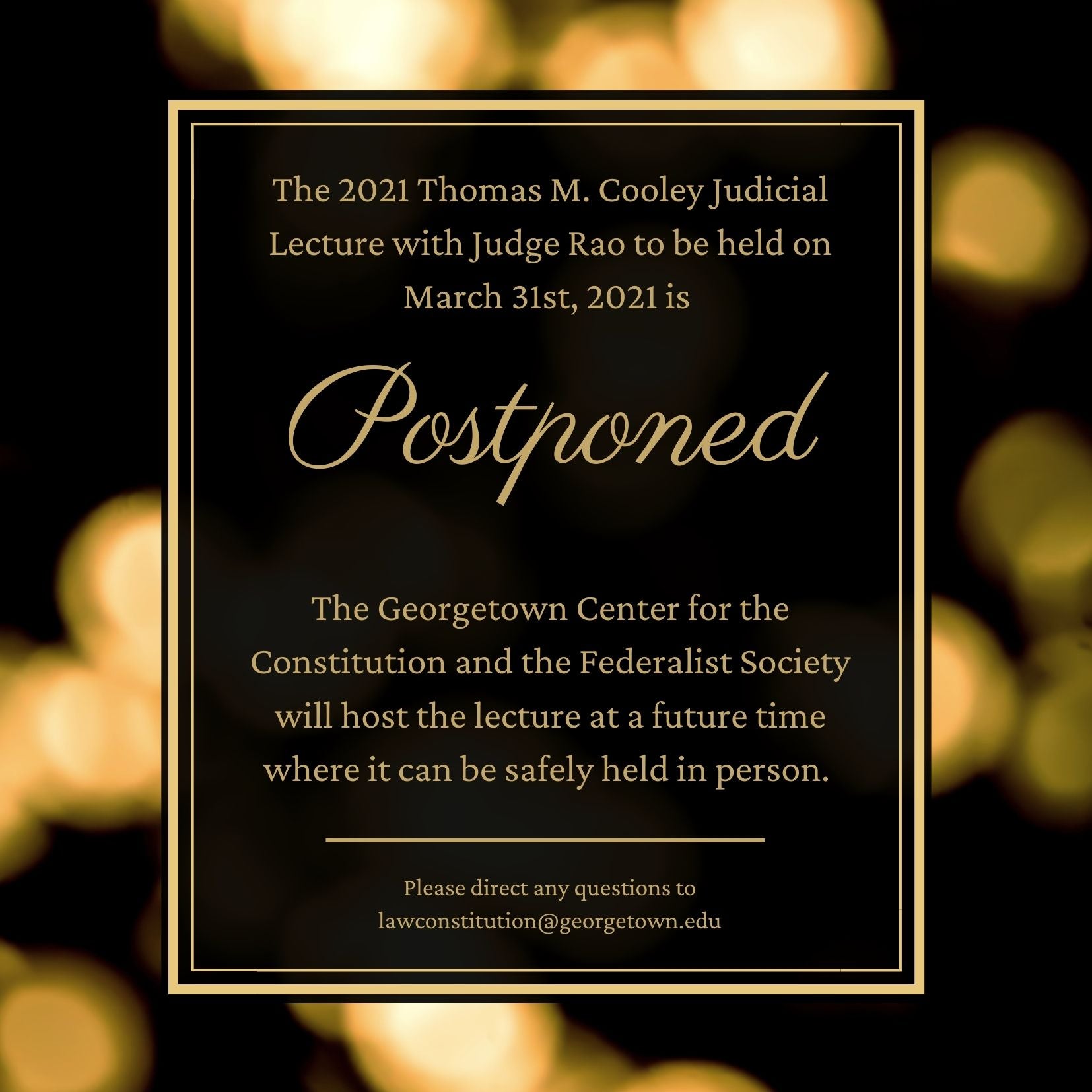 The 2020 Thomas M. Cooley Book Prize of $50,000 will be awarded to Professor Keith E. Whittington of Princeton University for his book, Repugnant Laws: Judicial Review of Acts of Congress from the Founding to the Present (University Press of Kansas, 2019). Mr. Whittington will receive the Cooley Prize at an award ceremony in May 2021.

“This book is a must-read for any serious student of our Constitution and how it actually works,” said Georgetown Law Professor Randy Barnett, director of the Center for the Constitution. Repugnant Laws presents the most comprehensive account of every Supreme Court decision reviewing the constitutionality of a federal statute since the nation’s founding.

“Facts matter and this book provides them,” Barnett said.  “From now on, no discussion of the practice of judicial review can ignore the book’s empirical findings. The most cynical political scientist will need to come to grips with its conclusion that ‘the justices are not lapdogs, and they have often bitten the hand of the party that put them on the bench.’ At the same time, idealists will need to incorporate its findings that the ‘justices have proven themselves to be allies of [their] political coalition leaders.’”

Critical papers about Whittington’s book will be provided by:

“Professor Fallon’s deeply scholarly and fair-minded book systematically examines a much-neglected topic in constitutional theory: exactly what makes a constitution legitimate—not merely in the sense that it is accepted by the general public, but that it is morally legitimate and ought to be accepted,” said the Center’s faculty director, Professor Randy Barnett.  “The book then uses its answer to this question to assess how the U.S. Constitution ought to be interpreted. While respectfully and knowledgeably critiquing originalism, Professor Fallon nevertheless affirms the importance of ‘original public meaning’ even to nonoriginalists.”

The first Cooley Prize was awarded to professors Gary Lawson (Boston University School of Law) and Guy Seidman (IDC Herzliya—Radzyner School of Law).  Their book, A Great Power of Attorney: Understanding the Fiduciary Constitution (Kansas University Press, 2017), explores what type of legal document the Constitution is and how that affects the powers it grants to government officials and the duties they owe the public.