Led by Professor Randy Barnett, the Center sponsors lectures, faculty colloquia, conferences, visiting scholars, post-graduate fellowships, and student fellows. All of its activities are designed to engage scholars, students, and even Supreme Court justices in conversations about how to interpret and apply the document that sits under glass less than ten blocks away from Georgetown Law.

Higher education’s credibility rests on the public belief that it is a place where all sides of every argument are subject to robust debate, disputation and discussion. If it becomes clear that these discussions are impossible on campuses, the reputation of higher education — and the shared world of facts it was intended to create — will suffer.

Treanor still has a chance to follow through on Georgetown’s promise that “all members” of its community have “the broadest possible latitude to speak, write, listen, challenge, and learn.” The university should end this investigation and model what higher education is meant to be: above the culture wars and committed to the unfettered search for truth.

Ilya Shapiro Joins the Georgetown Center for the Constitution

The Georgetown Center for the Constitution welcomes Ilya Shapiro as its executive director and senior lecturer. He will join the Center on February 1 after serving as a vice president and director of the Robert A. Levy Center for Constitutional Studies at the Cato Institute, and publisher of the Cato Supreme Court Review. Shapiro will oversee all aspects of the Center’s activities with an emphasis on its Originalism Outside of Academia initiative.

On Thursday evening December 1st, 2022 Professor Peter C. Myers will be delivering the Ninth Annual Salmon P. Chase Distinguished Lecture on Frederick Douglass and Abolitionist Constitutionalism. Cosponsored by the Supreme Court Historical Society, the lecture will be hosted by a Justice of the Supreme Court.

On Friday, December 2nd we will hold our all-day Eighth Annual Faculty Colloquium at Georgetown Law.

The Georgetown Center for the Constitution announced it will award its fifth annual Thomas M. Cooley Book Prize of $50,000 to Professor Michael W. McConnell of Stanford University for his book, The President Who Would Not Be King: Executive Power Under the Constitution (Princeton University Press, 2020). 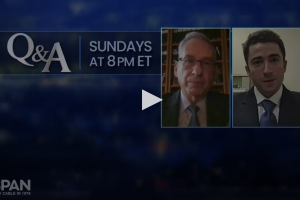 Professors Randy Barnett and Evan Bernick argued that the 14th Amendment, which gave the federal judiciary and Congress new powers over the states, has been misinterpreted by conservative and liberal judges alike since its adoption in 1868. 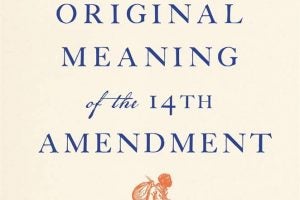 Preorder: The Original Meaning of the Fourteenth Amendment: Its Letter and Spirit

Adopted in 1868, the Fourteenth Amendment profoundly changed the Constitution, giving the federal judiciary and Congress new powers to protect the fundamental rights of individuals from being violated by the states. Yet, according to Randy Barnett and Evan Bernick, the Supreme Court has long misunderstood or ignored the original meaning of the amendment’s key clauses, covering the privileges and immunities of citizenship, due process of law, and the equal protection of the laws.

Barnett and Bernick contend that the Fourteenth Amendment was the culmination of decades of debates about the meaning of the antebellum Constitution. Antislavery advocates advanced arguments informed by natural rights, the Declaration of Independence, and the common law. They also utilized what is today called public-meaning originalism. Although their arguments lost in the courts, the Republican Party was formed to advance an antislavery political agenda, eventually bringing about abolition. Then, when abolition alone proved insufficient to thwart Southern repression and provide for civil equality, the Fourteenth Amendment was enacted. It went beyond abolition to enshrine in the Constitution the concept of Republican citizenship and granted Congress power to protect fundamental rights and ensure equality before the law. Finally, Congress used its powers to pass Reconstruction-era civil rights laws that tell us much about the original scope of the Amendment.

The Georgetown Center for the Constitution announced it will award its fourth annual Thomas Cooley Book Prize of $50,000 to Professor Sean Wilentz of Princeton University for his book, No Property in Man: Slavery and Antislavery at the Nation’s Founding (Harvard University Press, 2018).

On Friday, October 14th the Georgetown Center for the Constitution will host our Second Annual Gala at the National Archives. The evening will feature the Thomas M. Cooley Judicial Lecture, co-sponsored by the Federalist Society, with Judge Don Willett of the Court of Appeals for the Fifth Circuit. The Center will award the 2022 Thomas M. Cooley Book Prize of $50,000 to Professor Michael McConnell of Stanford University for his book, "The President Who Would Not Be King: Executive Power under the Constitution." We will also host our Alumni Dinner for participants of our Originalism Summer Seminar. Tickets will go on sale this summer.