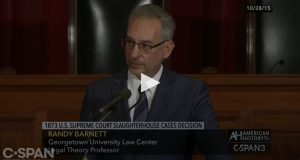 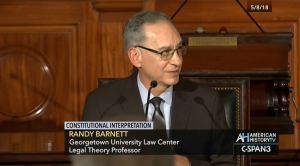 Law professors Randy Barnett of Georgetown University and Richard Primus of the University of Michigan explored different interpretations of the U.S. Constitution. They are introduced by Supreme Court Justice Ruth Bader Ginsburg. The event in the Supreme Court chamber was co-hosted by the Supreme Court Historical Society and the John Simon Guggenheim Memorial Foundation. 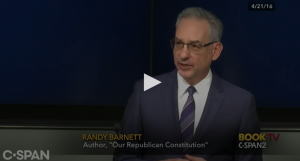 Professor Randy Barnett talked about his book Our Republican Constitution: Securing the Liberty and Sovereignty of We the People, in which he argues that the disagreement between Democrats and Republicans is based on their differing interpretations of the Constitution and the meaning of the phrase “We the People.” 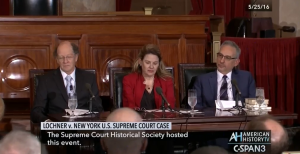 The Supreme Court Historical Society hosts a discussion among authors and academics on the 1905 U.S. Supreme Court case Lochner v. New York. In the decision, the Court ruled a New York law limiting the number of hours a baker could work violated the Fourteenth Amendment’s guaranteed “liberty of contract.” The decision ushered in what’s know in legal history as the “Lochner Era,” with the Court striking down many state and federal regulations on working conditions over a three decade period. Supreme Court Justice Stephen Breyer introduces this event. 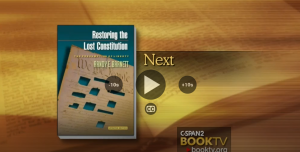 Professor Randy Barnett talked about his book, Restoring the Lost Constitution: The Presumption of Liberty, in which he argues that for many decades, U.S. courts have failed uphold the parts of the Constitution that protect our liberties. This interview, part of Book TV’s College Series, was recorded at Georgetown University Law Center in Washington, DC.