How Statelessness in the Dominican Republic Limits Children's Access to Education 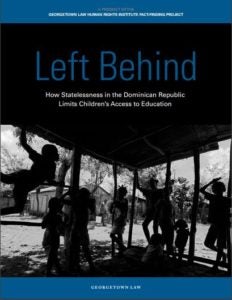 April 11, 2014 – On the first day of school, children often worry whether they’ll make new friends or like their teachers. But in the Dominican Republic, some confront a far graver concern: Will I be turned away because I don’t have a birth certificate?

A report published today by the Human Rights Institute at Georgetown University Law Center shows that many children born in the Dominican Republic but descended from foreigners, particularly Haitians, are denied an education. For generations, such children were recognized as citizens, but within the last decade, the Dominican government has refused to issue many of them birth certificates, identity cards and other essential documentation, rendering them stateless. The report, Left Behind: How Statelessness in the Dominican Republic Limits Children’s Access to Education, concludes that the Dominican Republic is failing to comply with its domestic and international human rights obligations, including the human right to education.

“We wanted to look at the human impact that statelessness has on children through the lens of education as an important enabling right,” said Georgetown Law student Jamie Armstrong, LLM’14, one of the report’s editors. “Education is critical to the development of a child and it is a gateway to full civil, political, economic, social, and cultural participation in society. What we found, however, is that this path is often barred with devastating consequences for children who are stateless or at risk of statelessness.”

The report is the product of months of research, including interviews with dozens of affected children and families, as well as educators, advocates and government officials. Several of the Dominicans of Haitian descent interviewed were prevented from attending primary school, secondary school or university because they could not obtain identity documents. Of those allowed to attend school despite not having birth certificates, many were denied the ability to take national exams required to graduate.

All of this occurs in spite of laws, policies, constitutional provisions and international human rights commitments that are meant to guarantee children’s right to education. The report found that administrative barriers, discrimination and confusion about the law has meant that in practice not all children in the Dominican Republic are allowed to go to school, even if they consider themselves Dominicans.

“We just want a miracle from God to get our documents, to have the opportunity to go to school,” said one 14-year-old girl interviewed for the report.

To contact members of the research team, email: statelessness-fact-finding@googlegroups.com.

Response from the Embassy of the Dominican Republic in the United States (in English) (Contact Our Current Dash/Muse Fellow if you need an accessible version of this document).

Correspondence with the Ministry of Education (in Spanish) (Contact Our Current Dash/Muse Fellow if you need an accessible version of this document).

Constitution of the Dominican Republic (in Spanish)

Operations Manual of the Ministry of Education (in Spanish)