The Cost of Stemming the Tide: 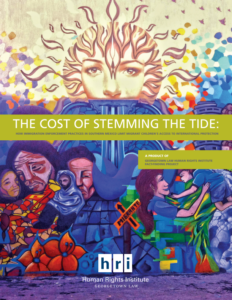 April 13, 2015 – The dramatic increase in the number of children migrating from the Northern Triangle countries to Mexico and the United States has garnered international attention.What is more concerning, though, is the lack of protection of the human rights of the children who are migrating.

A report published today by the Georgetown Law Human Rights Institute (HRI) finds that Mexico is currently falling short of its human rights obligations and is putting migrant children at risk of being returned to violent and dangerous situations in their home countries by failing to provide adequate access to international protection. The report, The Cost of Stemming the Tide: How Immigration Enforcement Practices in Southern Mexico Limit Migrant Children’s Access to International Protection, is the product of months of research, including dozens of interviews with affected children and families, advocates and government officials and agency staff. Many of the Central American children interviewed were seeking asylum in Mexico.

“Many children go unscreened for international protection by the Mexican government. On top of that, they have no knowledge of their rights to apply for asylum. Migrant children are one of the most vulnerable populations. . . Yet, they are left to fend for themselves when asking for protection,” stated research team member Mary Nelson, LLM’15.

The researchers also found that migrant children in Southern Mexico are systematically detained, often in poor conditions, for long and unpredictable periods. Detention conditions –coupled with the prospect of being detained for months while awaiting a decision on their status –deters children from seeking asylum.

Seventeen-year-old Ricardo spent ten months in detention after requesting asylum. He describes it as, “Two or three months went by and I was getting desperate. … You are like a fish in a glass of water. There is no place to go.”

The United States has invested significant political and fiscal resources in the fortification of Mexico’s southern border. But encouraging increased apprehension and deportation of children at Mexico’s southern border may come at a significant cost to children’s rights. International law requires that countries receiving migrants, like Mexico, meaningfully inform them of their right to seek asylum and provide access to procedures to determine whether they merit asylum or other forms of international protection. Although Mexico’s laws, policies, constitutional provisions are meant to guarantee these protections, the report found that they are failing to do so in practice.

“On paper, Mexico has an immigration and refugee legal framework that is very thorough, protective, and human rights-oriented,” said Andres Echevarria, LLM’15, one of the authors of the report. “In practice, though, we found that the immigration system currently in place in Mexico operates more like a child-deportation-machine.”

To contact members of the research team, email hrifactfinding2015@gmail.com.

Request for access to Mexican Instituto Nacional de Migración (INM) (in Spanish) (Contact Our Current Dash/Muse Fellow if you need an accessible version of this document).

Response denying HRI access to INM facilities and staff (in Spanish) (Contact Our Current Dash/Muse Fellow if you need an accessible version of this document).