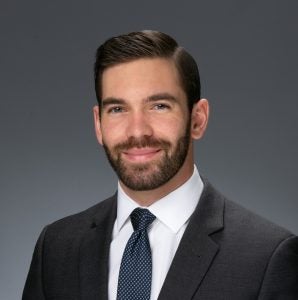 Prior to entering law school, Jon served for four years as an infantry officer in the 101st Airborne Division, United States Army. He led soldiers at several different levels and was responsible for planning and executing their training to ensure readiness to serve abroad. Jon deployed to Iraq in 2016 as part of Operation Inherent Resolve, and acted in an advisory and liaison role to Iraqi forces as they reclaimed Mosul. While at Georgetown, he has interned at the U.S. Securities & Exchange Commission’s Division of Enforcement and externed at the International Bar Association. He was also a summer associate at Cleary Gottlieb Steen & Hamilton.

Jon is interested in the intersection of business and law, and will join Cleary Gottlieb in New York as a corporate associate after graduation. He enjoys playing softball, rock climbing, playing golf poorly, and playing guitar.