The first graduating class of RISE fellows during their August 2018 pre-orientation.

When Toni Deane (L’21) learned that she had been elected to the top position at The Georgetown Law Journal, she ran to the offices of Maura DeMouy and Nicole Llorenz — the heads of a program that supports students from underrepresented backgrounds in law school and the legal profession.

The women, whom Deane refers to as her “law school moms,” were jumping up and down with joy: They had just heard through the faculty grapevine that Deane would be the first Black student ever to serve in the top post of the school’s flagship law journal. The three shared the historic moment together, as they had during other highs and lows of Deane’s law school career. “They really were there for everything,” Deane said, her voice cracking with emotion. 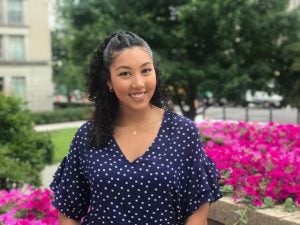 Deane, who plans to take on a pair of back-to-back federal clerkships in the coming years, attributes her path-breaking success to the leadership skills and lasting relationships she developed during the program, known as RISE. She said it gave her the courage to seek GLJ’s top spot and the confidence to overcome feelings of “imposter syndrome” during her tenure, which ended this spring. If it weren’t for RISE, “I wouldn’t have had the confidence to … dip my toe in every pond available.”

Deane is one of dozens of students from underrepresented racial, ethnic, and socioeconomic groups who were accepted into the program’s inaugural cohort three years ago and who are now graduating this month. Thanks to the program, many have “risen” to leadership positions, distinguished law school careers, and promising career prospects.

Minahil Khan (L’21), a Muslim woman who is a first-generation college graduate, this spring argued an important case before the 4th U.S. Circuit Court of Appeals in Richmond. She won’t know if she prevailed until later this summer. But her appearance is itself a victory, and one that is all the more remarkable given that she fasted daily in observance of Ramadan in the weeks leading up to it. “Minahil knew that she was the face and voice of her client, and she completely rose to the occasion,” said Erica Hashimoto, associate dean for Clinical and Experiential Programs and director of the Appellate Litigation Clinic, of which Khan is a member. 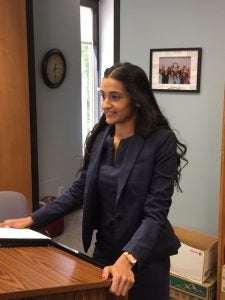 Khan said RISE gave her the courage to apply to the clinic and the confidence to calmly deliver a strong presentation as a student lawyer. “It just helped me really feel like this is something that I can do,” she said.

Dyllan Brown-Bramble (L’21), a Black man who is the first in his family to attend law school, echoed the sentiment. The program, he said, helped him build community and develop important skills, like strategies for taking notes and preparing for tests, that supported his success throughout law school.

“I’d never heard of outlining before,” he said. “We were able to be primed to think about those things really early on” and had the opportunity to practice them in a safe, supportive environment. A scholar at the Law Center’s influential Institute for Technology Law & Policy, he has received several prestigious fellowships over the past few years and will start his career at Latham & Watkins this fall. Being a member of the program’s inaugural cohort, he noted, is an additional “honor.”

Second-year RISE fellows are also making their mark. Agnes Lee (L’22) is the first undocumented immigrant to serve as GLJ’s top editor; Jade Baker (L’22) is the first Black woman elected to serve as president of the student body; and Jordan Metoyer (L’22) is the first woman of color to head up Barristers’ Council. “I feel incredibly honored and excited to serve the organization and Law Center,” said Metoyer, who is also a fellow with the Institute of International Economic Law and the Salzburg Global Cutler Fellows program, and has secured a clerkship on the Delaware Court of Chancery.

Other RISE fellows head “affinity groups” for first-generation, Latin American, and Asian American students and other student communities; are incoming and outgoing editors in chief of a number of other Law Center journals; and serve as law fellows, resident fellows, peer advisors and in other leadership positions. And many have landed coveted judicial clerkships across the country.

“RISE was incredibly helpful to get myself situated at the law school and to really ease the transition ” said Lee, while Baker said RISE “did the work of demystifying law school,” and introduced her to a wide community of friends, mentors, and supporters. During a mock interview, for example, Baker met a hiring partner at a renowned international law firm who soon after offered her a diversity scholarship and then a summer associate position. She plans to return to the firm this summer. Lee, meanwhile, met Deane at a RISE event and later followed in her footsteps as the top editor of GLJ. She called Deane a “guiding light” throughout law school: “RISE gave her to me, so I feel very appreciative of that connection.”

The brainchild of Dean of Students Mitch Bailin, Director of Academic Success DeMouy, and Director of Student Life Llorenz, the program drew early support from Dean William M. Treanor, who has flagged it for expansion.

“RISE is training the leaders of the future, both of the student body and the profession,” Treanor said. “It’s very clear that helping students from underrepresented backgrounds thrive in law school pays great dividends for all. We’re building on this program in the hopes of multiplying its great impact.” 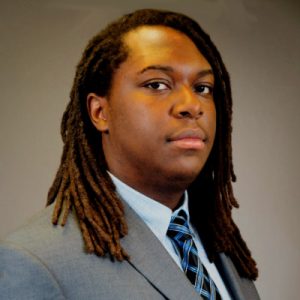 Launched in 2018, RISE was originally conceived as a program supporting students in the fall semester of their first year, but it has since expanded to span all three years of law school. Programming begins for 1Ls in mid-August with a rigorous “pre-orientation” week, during which students take mock classes, complete simulated homework and exams, and strengthen leadership and professional skills. It covers everything from case law and library research to financial health and “straight talk” with upper-class students. Incoming 1Ls have ample opportunities to meet and bond with fellow students, faculty, staff, and others before classes begin. At the end of the week, “I felt like I had been at Georgetown for a month,” Brown-Bramble said.

But the program doesn’t end there. Throughout their first year, RISE fellows are also paired with peer mentors, who assist with the social transition to law school, and teaching fellows, who support academic and professional skill development. RISE fellows meet in small groups to hone critical thinking and study skills and explore the legal profession, programming that complements a “1L 101” series of workshops open to all first-year students. Programming focused on community building and career path development continues through the upper-class years, and DeMouy and Llorenz stay in close touch with RISE Fellows and offer an open ear — and an open door — at all times.

Perhaps the best part of the program, however, is the strong sense of community it builds among participants, Lee said. Brown-Bramble compared his RISE cohort to a “family,” a sentiment that other RISE fellows echo. DeMouy and Llorenz “created an environment where anyone in RISE could lean on them,” Deane said.

Alumni have been instrumental to serving RISE students more comprehensively.  They have provided critical programming on professional skill development and volunteered to play meaningful mentoring roles.  Some, like George Bilicic (L’88), vice chair of Lazard, a global financial firm, have helped sustain the program through generous donations.

“The RISE program is incredibly thoughtful and impactful,” Bilicic said. “My wife, Laura, and I appreciate the chance to support RISE and thus help the students who participate in it. In our view, the RISE program aligns perfectly with all of the wonderful values of Georgetown.”

This year, RISE fellows sought to expand the program, and their wish was granted. This fall, Treanor has authorized the hiring of a full-time program manager who will oversee the day-to-day operations of the program. DeMouy hopes this new hire will allow RISE to offer additional support for legal and exam writing, expanded career path offerings, and the establishment of a formal mentoring program with interested alumni.

Meanwhile, RISE’s reach continues to expand. This coming year, RISE will enroll between 105 and 110 students — roughly double the number of students who were accepted in the program’s first year. Applications are open to all incoming students and will be accepted until June 4. Students who are admitted to the program will be notified no later than June 18, and the pre-orientation week will take place from August 16 – 20. It is offered at no cost.

“It has been exciting to see enthusiasm for the program spreading by word of mouth,” DeMouy said. “We have incoming students — the minute they get accepted in January — they call or email us and want to learn all they can about how to apply to RISE.”