When Raquel Braun (L’10) was choosing law schools, she had to decide between Georgetown Law and a school that was advertising her chief interest, sports law. She opted to go to Georgetown and build what she wanted. At the time, Georgetown University had already launched a Georgetown Entertainment & Media Alliance. So thanks to the hard work of Braun and other students in the Classes of 2009 and 2010, a law division — known as GEMALaw — was quickly born. February 9 marks the 11th Annual GEMALaw Sports and Entertainment Law Symposium in Hart Auditorium, with the annual Alumni Achievement Award going to Braun herself. 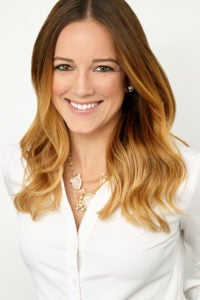 “[GEMALaw exists] because Raquel decided it was going to be founded…” said Daniel Navarro (L’09) at last year’s symposium. “We happened to be along for the ride.”

Though the job outlook had taken a sharp dive when Braun graduated in 2010, she saw the economic downturn as an opportunity to follow her dream of working in sports. She moved across the country to do contract work for Fox Sports in Los Angeles in what was supposed to be a temporary position and worked as hard as she could. Her hard work paid off, and today, she’s the senior director of business and legal affairs at Fox Sports. We sat down with her for an interview in anticipation of the upcoming conference; excerpts from the interview follow.

What made you decide to go to law school? Why Georgetown?

I grew up in a Georgetown family. My dad, Albert del Castillo (C’79, L’82), is a double Hoya. His mother, who had come to the States from Cuba…discovered Georgetown when she was studying for her medical boards in Virginia, and so she…told my dad about it. When I was looking at law schools, I knew I wanted to work in sports. My undergrad degree was in sports management and business. There were a couple of law schools in the country that had sports programs, sports tracks or a sports institute, and I was very fortunate to get accepted to those schools. At the end of the day, I decided that I wanted to go to the very best school I could go to and that was Georgetown. There are a lot of alumni from Georgetown, both undergrad and the Law Center, who work in the field. So I thought, well, I can go there and start something.

What made you decide to focus on sports?

Since I was a little kid, I’d always loved sports…I come from a very big family, and I just wanted to go play baseball with the boys. So when I was in high school and applying to colleges, I went to the University of Florida knowing that law was something I thought I wanted to pursue. I knew that [the law firm route] wasn’t necessarily what I wanted to do, but I had seen enough to know that I was interested in the law itself. When I went to college, my orientation leader gets up and says, “I’m a senior, I’m a sports management business major and I’m going to law school next year.” For me, that was it. I was fascinated by the idea of working in sports, but in a legal capacity…

Last year at the symposium, one of your co-founders said, “GEMALaw exists because Raquel decided it was going to be founded.” How did you build it?

The Georgetown Law community is very supportive of law students who are entrepreneurial or have big ideas. I was very fortunate to meet Rich Battista (B’86), who founded the Georgetown Entertainment and Media Alliance (GEMA) in 2002 out in Los Angeles, and it just was a very serendipitous meeting. GEMA was launching its D.C. chapter in 2007, when I started law school, and we decided it made sense to also launch GEMALaw at the Law Center — focused on the legal issues or legal areas of practice within sports entertainment and media.

This is the 11th annual GEMALaw Symposium. What do you remember from the first symposium, in Spring 2008?

It took a lot of planning. A very good friend of mine in law school was Jonathan Lerner (L’10), and he introduced me to his uncle, who is part of the ownership group of the Washington Nationals. Edward Cohen (L’70) is a law alum and so in getting to meet him, and talk to him about Georgetown, we shaped a lot of that very first symposium around Ed and baseball. Introductions were made by other students or recent alumni that had worked for the Nationals or worked in the baseball space. The Nationals — the very first season in their new stadium was going to be the 2008 season. So the timing was really good for the topics that we talked about that year. It was small: we had two panels, we had the alumni achievement award and a reception and then it just grew from there.

Did you create the GEMALaw Alumni Achievement Award that you are getting now?

I did. We’ve had amazing alums come speak and receive the award, so it’s very humbling. It’s amazing when you look back and you see all of these alums who went to Georgetown Law and work in this space. [For a student], there are a lot of alumni out there who do what you want to do.

Were there professors here who inspired you?

It was a mix of professors and staff. Dean Mitch Bailin was so supportive of me starting this new student organization that was totally outside the box. I remember his support very early on…working in sports and entertainment, media, it’s just very different in terms of how you get internships. Having a lot of the support of the administration was extremely important to our success from the beginning. Andrew Brandt (L’85) [former vice president of Player Finance and general counsel for the Green Bay Packers] was my sports law professor, my second year of law school. He actually received the alumni achievement award a couple years after I graduated. I remember hearing him tell stories about his career, and for me it was an affirmation that as a lawyer you can go and do these things, and you’re not expected to have a very traditional career path, you can go in a different direction.

You are the senior director of business and legal affairs at Fox Sports. How do you keep climbing?

For me, a lot of it is hard work. Every person that comes to Georgetown Law is very smart. I studied harder than I ever had in my whole life my first semester of law school. But then you get your grades and think…okay, I know I’m smart, [but] I’m realizing that I’m not the smartest person here. I had to be okay with that. What I did, and it ties right in to GEMALaw, I made the decision that I will still study hard, but I need to have something else. What else am I going to do to make myself different, to help me get the kinds of jobs that I knew I wanted in my career? I put a lot of effort into GEMALaw and into internships. I made sure that every semester I had a job. I interned all throughout law school until my last semester when I decided that my job was going to be putting on the biggest and baddest GEMALaw symposium, as kind of my final goodbye. So a lot of it is being aware, recognizing what your strengths are and then always working hard.

My day-to-day focuses on soccer, football and baseball for Fox Sports, and one of the coolest, most proud moments was covering the Women’s World Cup in 2015 in Canada. On our set, visiting, we had some of the athletes who had just won the World Cup, like Abby Wambach and Megan Rapinoe, and seeing them there, on the set and in the space I had worked with this group of people on was very special. It was unlike anything I ever thought I would do in my career. I’m now preparing to go spend few weeks in Russia this summer for the Men’s World Cup… When you see these faces that you grew up cheering for — like Jimmy Johnson, who was the coach for the Miami Dolphins — now I see him on Sundays when I’m covering NFL. It’s surreal sometimes.

What’s a typical day for you?

My life revolves around sports seasons. For NFL, you start ramping up at the end of the summer… Baseball season is getting ready to start, so [we] are ramping up now, whether it’s talent deals, production related agreements…you’re always available in case anything is needed as FOX goes and produces these big events. And with the World Cup…I’ve been working for over two years preparing for this summer’s Men’s World Cup in Russia where I will go spend a few weeks, living in Russia while FOX produces this huge event. And it takes a lot, you’re talking about a different country, different language — as an attorney, a different set of laws and standards that I don’t deal with on a daily basis but you learn the importance of relying on experts, whether it’s outside counsel or other experts within our business in order to get the deals done. And we follow that next year with the Women’s World Cup in France. So there’s no predicting a day…but it’s a lot of fun, challenging and constantly changing.