The intricacies of an under-the-radar international economics dispute – a tax war, not a trade war – emerged during a spirited discussion at a Georgetown Law event this month.

The stakes are enormous, according to Georgetown Law Professor Itai Grinberg, who moderated the February 3 event, “Tax & Trade Wars?” If the U.S.-European Union tax war erupts, it could hit the global economy as hard as the U.S.-China trade war that dominated headlines for the past year.

So why has the tax spat been invisible to virtually everyone except international tax experts?

“International tax historically has been an area where tons of money was made and economic conflict didn’t play out. It’s viewed as an incredibly arcane and complex area. The rest of the world has always left the international tax people alone,” said Grinberg, who authored a January Foreign Affairs article that described the current dispute.

In brief: A century-old consensus about how to tax income earned by multinational corporations across borders is at risk of failing. More than half of European Union (EU) countries have passed or announced unilateral digital services taxes, which would hit U.S. tech giants such as Amazon, Facebook, and Google, which earn significant income but pay almost no taxes in countries where they have no physical presence.

The Organisation for Economic Co-operation and Development (OECD) has convened 135 countries to try to forge a compromise by the end of this year. The digital taxes are on hold pending the OECD’s global tax rewrite.

However, a German official at the Georgetown Law event predicted that if there is no compromise by December, EU countries most likely will move forward with the digital taxes.

The United States would then likely respond with retaliatory tariffs, said Christian Schleithoff, head of the German embassy’s financial division in Washington and former head of the German finance ministry’s international tax unit. That would push the tax dispute into the realm of trade and explode into the global economy, subjecting cross-border income to double or even multiple taxation and prompting multinational corporations to pull back from trade and investment.

Schleithoff also offered hope, saying he is optimistic that the OECD’s negotiations will succeed, and signaled that the government of Germany – Europe’s largest economy – was willing to compromise. 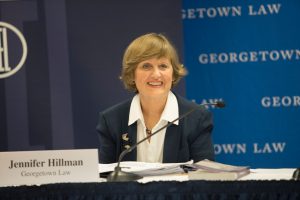 Georgetown Law Professor and trade expert Jennifer A. Hillman qualified that optimism during her remarks, citing a general trend of waning faith in multilateralism and its institutions.

“A lot of these problems are absolutely fixable,” said Hillman who previously served as a judge on the World Trade Organization’s Appellate Body. “The question is whether we have enough global good will to fix them.”

Driving all these tensions is worldwide growth in the services sector, and international fragmentation of the production of services – for example, outsourcing of IT services – said Hillman, who has also previously served as general counsel at the Office of the U.S. Trade Representative.

The breakdown in the international tax consensus also was prompted by multinational corporations shifting their profits around the world to avoid paying taxes.

However, Grinberg said there was faulty logic behind the European move to aim new taxes only at digital services.

“If more of Amazon’s income is taxed where its customers are, then the same rule should apply to Louis Vuitton, since the entire economy is digitalizing,” said Grinberg, who previously served in the U.S. Treasury Department’s Office of International Tax Counsel and as Counsel to President George W. Bush’s bipartisan Advisory Panel on Federal Tax Reform. He organized the tax and trade event with Georgetown Law’s Institute of International Economic Law (IIEL).

“My main takeaway was just how intertwined international economic law disciplines are,” Memon said. “As I am starting my career, it drove home just how broad my expertise has to be.”

Beyond the percolating international tax dispute, Memon and Himmelstein agreed that this is a fascinating time to study tax law because of the Trump administration’s 2017 tax changes, the Tax Cuts and Jobs Act (TCJA), now being implemented by regulations.

“The TCJA changed so much so quickly – especially in international tax – and giants of tax law are often muddling along and trying to figure it all out, just as we are,” Memon said. “We also have the advantage of not having to untangle what we were taught about the old law. We’re able to dive right into the new law.”

Himmelstein said that he read a New York Times article about how the TCJA changed one word in a statute, and as a result, professional sports franchises now could face capital gains taxes when they exchange or trade their players: “When I read that article, I was hooked and knew I wanted to practice tax law.”

Washington, Center of the Tax Universe

Himmelstein leveraged Georgetown Law’s location in downtown Washington, DC, to do an externship with a judge on the US Tax Court – located across the street from campus – and he plans to clerk there this summer after graduation. Memon is externing for the Washington office of law firm Kostelanetz & Fink, which specializes in civil and criminal tax controversies, across another street from the Law Center.

In the classroom, the students benefit from adjunct professors and visiting professionals who work blocks away. The adjunct professor for Grinberg’s seminar, “Current Regulatory Developments in Business and International Tax,” is T. Timothy Tuerff, a former managing partner of Deloitte’s Washington National Tax Office. One visitor to the seminar was Brett York from the Treasury Department’s Office of Tax Legislative Counsel, who played a lead role in drafting Treasury’s proposed regulations for TCJA.

“We have this unique opportunity to meet the people who write the regulations and know how the laws are applied,” Himmelstein said.

Memon said it was precisely those types of interactions that persuaded her to attend Georgetown Law: “Whenever there’s a new development on the international economic stage—be it new regulations, a new OECD publication, new financial instruments—many practitioners turn to Georgetown professors to help untangle it.”

Grinberg said that Georgetown Law’s emphasis on the overlap of different areas of international law may help provide a resolution to future economic disputes: “My hope is that students out of our programs can see the relationships and therefore help shape a new liberal economic order that both works for everybody and is less chaotic and scary than the one we have now.”