To many Americans, the financial crisis of the late 2000s was a singular episode of the recent past, in which homeownership became a casualty of late capitalism and its capacity to financialize nearly every aspect of modern life.

But to Professor K-Sue Park, it was the latest chapter in a narrative extending back to the earliest days of colonial America, when mortgages, and subsequently foreclosure, rose to prominence as a tool by which European settlers extracted land from indigenous people, in transactions characterized by a deep asymmetry of power and profoundly divergent notions of land, money and property. 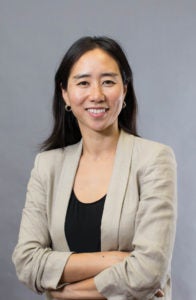 In her scholarship, Park connects these histories to contemporary legal practices, tracing how norms, actors, and institutions evolved along the way. She has taken deep dives into foreclosure, in her Law and Social Inquiry article “Money, Mortgages, and the Conquest of America,” as well as migration, in her recent Harvard Law Review article “Self-Deportation Nation.”

“My goal in doing this work is also to show how our institutions were formed and the kinds of dynamics that they rely upon in order to work that have been pretty consistent over the years,” she said, referring to how both migration and foreclosure have evolved in the U.S.

Park knows the contemporary foreclosure landscape well, from her work with Texas RioGrande Legal Aid as a foreclosure defense attorney, based in El Paso on an Equal Justice Works Fellowship, as well as her work as a Harvard Law student in communities in Massachusetts. In Texas, she handled hundreds of cases of mortgage scams, often perpetrated on immigrant and military families, fitting all too easily into a centuries-old pattern.

“We tend to view the origins of the country as distant past and pretty unconnected from where we are now, but the actual practices of regulating migration, or the simple practice of foreclosure, [has not changed] that much, in its basic forms,” she said.

In her study of self-deportation, which she describes as “making life so unbearable for a group that its members will leave a place,” Park found similar dynamics that date back to the colonization of America, when settlers pursued an indirect removal policy by passing laws and building institutions that attacked native peoples’ lives from every angle. It’s a concept that has taken on urgent meaning in an era of harsh federal immigration policy, with laws prohibiting undocumented immigrants from accessing hospital treatment or driver’s licenses.

In addition to her J.D. from Harvard, Park pursued a PhD. in Rhetoric at the University of California, Berkeley, a path that allowed “more space to process…and think more deeply about these questions.” As the Critical Race Studies Fellow and Lecturer in Law at the UCLA School of Law, where she taught from 2017 to 2019, she sought to help her students look at issues of social justice from a both systems perspective and at the individual level.

At Georgetown Law, she’s excited to have the best of both worlds, citing the intellectually rich Curriculum B (known as “Section 3”) that encourages students to think critically about the role that law plays in society, and its connection to other institutions and disciplines such as economics and sociology. She’s excited to engage with Georgetown Law students as they try to figure out where they can best have an impact.

“I’m trying to show how many different kinds of entities and forces, including both public and private entities, make law and create dynamics that are both legal and social and political, that determine the climate in which we live,” she said. “So my goal is really to get students and communities…to understand where the power lies to make any kind of a difference, and where battles can be won.”