On the Hill: Professor Chris Brummer on Facebook’s Proposed Cryptocurrency and Its Impact on Consumers, Investors and the American Financial System

In his oral and written testimony (entitled “99 Problems,” after the Jay-Z rap song), Brummer raised concerns with the official “white paper” that introduces Libra. As Brummer explained, white papers “have emerged as a common tool through which digital asset companies communicate with potential consumers and investors about new projects and ventures. However, white papers have faced mounting criticism — for their hyperbolic language, false promises and omissions of material information consumers would need before purchasing a digital asset.” 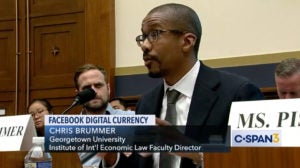 Professor Brummer testifying on the Hill, from C-SPAN.

“The Libra white paper is peppered with big promises and few details,” he said, adding that the project involves a risk to purchasers and potentially the financial system that is not disclosed. “Even for me, a staunch supporter of innovation and upgrades for our financial system, this is, at a minimum, disappointing. The white paper is…intended to condition the market for the adoption of a product that Facebook wishes to sell to billions of people around the world. The lapses are all the more problematic given the securities-like features of Libra coins and possible implication of U.S. securities laws.”

Brummer outlined some of the red flags: “The Libra white paper fails to inform people in unambiguous terms that they [could] lose their money, and that runs on the coin are possible. Instead, [it] routinely suggests and doubles down on the idea that Libra will virtually always provide stability in terms of the purchasing power of the new currency,” he said, adding that this is not necessarily the case.

“The Libra is subject to foreign currency risk, something the white paper does not clearly acknowledge. Indeed, the coin could cost their holders money in the form of lost purchasing power should there be a run on any one of the underlying currencies in the basket. Moreover, runs on the Libra itself could be catalyzed for reasons that have nothing to do with the underlying basket, including a hack…or revelations that sensitive consumer data had been shared with Facebook or other Libra Association members.”

Finally, “the White Paper fails to disclose how its promise of a secure scalable and reliable blockchain could be compromised by whatever is the weakest link in its ecosystem” —including exchanges in jurisdictions with lax rules. “There is a host of critical questions about the rights, duties, and selection criteria for authorized resellers and Libra association members—not to mention how potential conflict of interest will be managed… These kinds of omissions are more than just a matter of technicalities….everyday people are far from fully informed and not on a level playing field[.]”

Brummer and the other panelists fielded many questions in the lengthy hearing. In Rep. Brad Sherman (D-CA) wondered about anti-money-laundering laws with respect to an organization headquartered abroad.

“Certainly U.S. laws would not apply; the bigger risk lies with those jurisdictions that are so weakly regulated that they are falling outside of international agreements,” Brummer answered, noting that real questions do arise as to the ability to enforce and promote the kinds of safeguards that we have in the United States.

“When you use other people’s money, you should expect a government or some kind of regulatory regime is going to want to know what you are doing with it…,” Brummer said. “The challenge [arises] when you have a private institution…lending with other people’s money, without offering the kinds of proper safeguards or disclosures to relevant investors, that’s when the red flags arise.”

Rep. McHenry, however, wondered how history was going to judge the hearing. “I fear not well … there is a breathlessness to the hyperventilation about Facebook, I get that … [But] people fear something they don’t understand. Facebook is using the language of cryptocurrency and digital currency, they are using the words of blockchain technology … there is this underlying fear among policy makers here on the Hill… Politicians, when they don’t understand innovation, they want to kill it.”