Mark Vatch (L'20), a volunteer EMT, has served on the frontlines in New York City during the COVID-19 pandemic.

For Mark Vatch (L’20), public service runs in the blood. So when the novel coronavirus struck his hometown, he did what came naturally: he rushed to the front lines of the pandemic to provide emergency medical care, risking his own life to save the lives of others.

“I couldn’t just sit there watching all these people die,” he said. “I had to go and help.”

The son of the head of the largest ambulance company in New York City, Vatch grew up helping others in need – a legacy he has carried on as a young adult. Soon after turning 18, he signed up to become a volunteer emergency medical technician (EMT), and began serving alongside his father and brother.

“It was always something I wanted to do,” he said. “I loved watching my father run out on calls.”

In the years since, he has responded to more than 5,000 emergencies – all while earning his bachelor’s degree in economics at Queens College, a finance certificate from Harvard Business School, and his juris doctorate at Georgetown Law. The pace of his volunteer work shifted into high gear this spring as the virus crashed onto New York City, but Vatch didn’t slow down – despite a full courseload and threats to the health of himself and his family.

After returning to his family home for spring break, Vatch began performing health screenings at JFK International Airport and developed symptoms of COVID-19. To protect his family – and especially his mother, who has underlying respiratory conditions – he returned to his apartment in Washington, D.C., and sheltered in place. When his symptoms cleared a week later, he returned home and resumed volunteering at airports, hospitals, and on the scene of crises.

Many other students in the Georgetown Law community are also giving their time, effort, and expertise amid the pandemic. They include Brianna Arscott Grant (L‘22), who is delivering food to sick and elderly people in New York alongside her mother, a healthcare worker, and Tamar Hoffman (L‘22) and Jack Hsia (L‘22), who are using their legal skills to help tenants in the nation’s capital fight for stronger renter protections so they can safely shelter in place during the crisis.

Several students are volunteering at the Washington Lawyers Committee’s Workers Rights Clinic, which is helping workers access unpaid wages, unemployment benefits, and time off to care for themselves or loved ones. And a number of evening students are combating the virus and supporting people in need in their day jobs. Some are working on the federal government’s response to the crisis as staffers and contractors in the U.S. Senate, the U.S. Department of Health and Human Services and the U.S. Department of Defense, while others advise pharmaceutical companies on government relations or work for healthcare associations.

Patrick Bailey (L’22), who serves as medical director for the American College of Surgeons, has been working overtime to help surgeons manage new challenges to their practices under “incredibly stressful” circumstances. “The pandemic has taken us all way out of our comfort zone,” he said, “but we must adapt and overcome.”

Serving on the frontlines 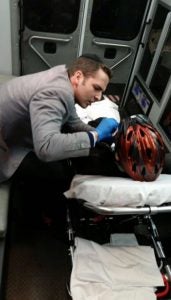 Vatch, meanwhile, continues to serve on the frontlines. Over the past two months, he has taken hundreds of patients to the hospital – and pronounced more than a dozen dead. One especially challenging case involved an older man who was having trouble breathing. Vatch took him to the hospital, held his hand, and reassured him as his condition deteriorated – all while the man’s family waited anxiously at home, unable to accompany him to the hospital as he fought for his life.

The man died soon after. “I literally was the last one to talk to him in his life,” Vatch said. “That was definitely a tough one.”

Vatch has had uplifting experiences as well – as when he saved a child from a possibly fatal allergic reaction. Vatch responded to the call at the height of the pandemic in New York City, arriving on the scene to find a 9-year-old who was blue and barely breathing. He quickly administered a dose of epinephrine, which allowed the child to regain control of his breath. “Had I arrived two minutes later, I’m not sure the kid would be alive today.”

Vatch doesn’t rest even during what little downtime he has. In recent weeks, he has helped create a network of healthcare professionals to serve his community, helped convert a garage into a storage unit for oxygen concentrators, and organized a service to deliver the concentrators to patients in their homes so they can stay out of the hospital as long as possible.

The intense and relentless volunteer work has certainly taken a toll. The emergency response team has been pushed beyond its limits during the pandemic, and many people have died as a result. Vatch receives calls at all hours of the day and night, which has interfered with his sleep and studies. His mother developed symptoms of the disease, likely from exposure to the virus from Vatch or his father or brother. She recovered, but Vatch can’t say the same of nearly two dozen other friends and acquaintances who died this spring.

Still, Vatch wouldn’t have acted otherwise – and says the Georgetown Law community has had his back throughout his final, most challenging, semester of school. He is on track to finish coursework this month and graduate with the rest of his class, after which he plans to attend business school and embark on a career in finance.

“I knew the school would be behind me,” he said. “One of the reasons I chose Georgetown is because they’re very big into commitment to service of others. They’re firm believers in that.”