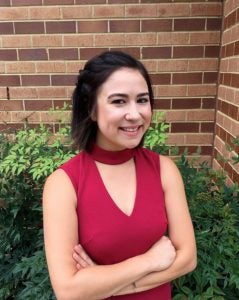 Michelle is a California native. She graduated from the University of California, Berkeley with a B.S. in Society and Environment and minors in Public Policy and French.

Michelle comes to Georgetown after three years at the Center for Environmental Health (CEH) in Oakland. At CEH, she coordinated laboratory testing of e-cigarette products for the publication of the first ever large study of cancer-causing chemicals in nearly 100 different e-cigarettes. Alongside her team, she helped develop some of the strictest injunctions in the country regulating e-cigarette packaging, labelling, and marketing.

During her time at CEH, she uncovered thousands of consumer products that exceeded California’s toxic chemical safety laws and collaborated with experts to remove these unnecessary public health threats. Concerned with reports of high blood lead levels among children in Oakland, as Litigation Coordinator she developed and distributed free lead paint screening kits to direct-service organizations working with low-income and immigrant families in the Bay Area.

As an undergraduate, Michelle was a member of AmeriCorps’ Justice Corps program where she assisted low income people who could not afford legal representation by providing information and referrals at clinics in Contra Costa County. Here, she primarily served people from the heavily polluted city of Richmond, many of whom were dealing with health issues that complicated the legal process.

During her time at Georgetown, Michelle hopes to gain a deeper understanding of the way in which exposure to toxics and environmental pollution affects individual’s interactions with the criminal justice system by studying criminal and environmental law with a focus on public health. She plans to use her law degree to become a more effective advocate for environmental justice communities.

In her free time, Michelle collects vinyl records and is a disc-jockey who spins house and techno music. Within the male-dominated electronic music scene, she advocates for women’s representation and equal treatment in the industry. 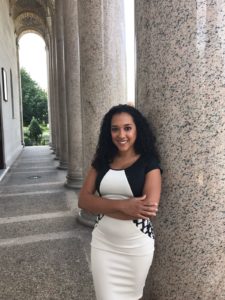 Brigitte was born and raised in Miami, Florida. She graduated Magna Cum Laude from Florida International University in 2016 with a Bachelor of Science in Public Relations. As a former foster youth, Brigitte’s passion is advocating for the rights of foster youth in Florida. During her undergraduate studies, she developed a program that would ensure foster youth are aware of their legal rights and benefits prior to aging out of the foster care system. Brigitte was selected to present her program before members of the Florida Department of Children and Families. She was widely recognized for her work by public officials and nonprofit organizations within her state’s child welfare system, and hopes that her program will become a standard requirement for all foster children in Florida.In addition, Brigitte works with legislators and judges in South Florida to reform child sex trafficking policies in her home state. She believes that outdated policies, a lack of awareness and minimal accountability has given rise to widespread human trafficking in the United States– with foster and homeless youth at the center of this epidemic.Brigitte worked in the human trafficking division of the Miami Children’s Courthouse as a G.R.A.C.E Court advisor and advocate for teenage victims of sex trafficking.

While attending Georgetown Law and through mentorship from the PILS community, Brigitte hopes to gain skills in strategic litigation and legislative advocacy for victims of human trafficking and foster youth. It is her objective to continue developing her program and encourage legislative change for at-risk youth. 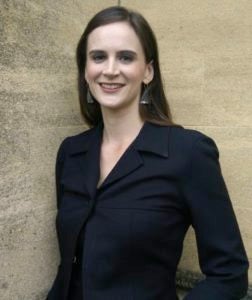 Tamber Hilton comes to the Georgetown Law evening program after spending six years working in refugee resettlement in Bangkok, Thailand and in Tucson, Arizona. While in Thailand, she ran the interpreter services program for the US Resettlement Support Center operated by the International Rescue Committee, and completed a Master of Studies (MSt) in International Human Rights Law at the University of Oxford.

While working on her master’s dissertation, she accepted a position as Legal Advocate at Asylum Access Thailand (AAT), where she advised and represented refugees seeking recognition and durable solutions from the United Nations High Commissioner for Refugees (UNHCR) in Bangkok. After returning from Thailand in 2016, she took on a role at Lutheran Social Services of the Southwest (LSS-SW) managing a team of dedicated refugee resettlement professionals in Tucson, Arizona committed to welcoming and integrating refugees arriving through the US resettlement program.

Tamber is also a practicing Spanish interpreter and translator, and a trainer of community interpreters. She is thrilled to be in D.C., where she hopes to work on language access issues from both a legal and practical perspective. As a JD candidate, she looks forward to exploring legal practice areas related to migrants and refugees in America and beyond, and justice and reconciliation for communities marked by conflict and displacement. 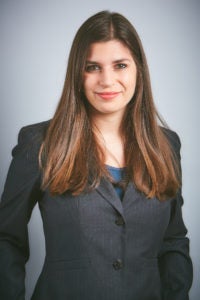 Grace has worked on immigrant rights issues since graduating from college in 2013. Most recently, Grace spent over three years as a Program Analyst at the Vera Institute of Justice’s Center on Immigration and Justice, based in New York City. In her role at Vera, Grace focused on advancing immigrants’ access to legal information and counsel. Grace worked with federal government agencies and nonprofit organizations to help manage a number of immigration legal services programs. After graduating from Georgetown Law, Grace plans to continue advocating for immigrants’ rights. She hopes to pursue a career in impact litigation on issues affecting detained adult immigrants.

Prior to joining Vera in May 2014, Grace was a Global Academic Fellow at New York University’s campus in Abu Dhabi. There, she provided academic support for students and assisted in the university’s community relations department. While in Abu Dhabi, Grace volunteered at a shelter for female migrant workers who had fled their abusive employers and were waiting to be repatriated. Grace has also held numerous internships at public service organizations, such as the American Friends Service Committee Immigrant Rights Program in Newark, NJ and the Focus Forward Project in New York, NY. Grace also interned with the Justice Studies Center of the Americas in Santiago, Chile, an Inter-American organization focusing on justice system reform in Latin America.

In her spare time, Grace has held a number of volunteer positions. Most notably, Grace served a two-year term as Co-Chair of the Ms. Foundation for Women’s Young Professionals Advisory Committee during its inaugural two years. As Co-Chair, Grace helped build the committee’s membership, organize events, and raise funds for the foundation. 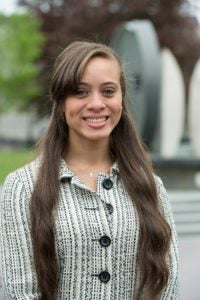 In her senior year, Sabrina collaborated with Villanova’s French and engineering departments and Catholic Relief Services in an effort to provide clean water and treatment services to target villages in Madagascar. She used skills in English-French translation to facilitate the creation of an online course in water treatment. This course allowed greater access to training needed by Malagasy engineers to maintain clean water systems in their communities. From this, Sabrina learned the importance of sustainability in social justice work.

After graduating, Sabrina served as an AmeriCorps VISTA through Philly Fellows, a competitive, post-graduate service fellowship. During this year, she worked as the Admissions Specialist at Year Up, a national nonprofit organization committed to closing the opportunity divide for young adults. She coordinated and updated admissions processes while creating meaningful community partnerships. These efforts allowed for greater access to higher education for the program’s young adults. Having recently finished her term of service, Sabrina is eager to continue this work while pursuing education law at Georgetown. She hopes to advocate for the educational rights of underrepresented youth and larger education reform across the nation. 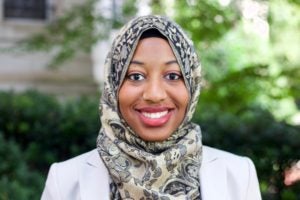 Nicole was born and raised in a tight-knit Ugandan American community located in Atlanta, Georgia. She always had a passion for human rights. She double majored in Global Studies and Arabic, and she minored in Social and Economic Justice at the University of North Carolina at Chapel Hill.

Her passion for justice has taken her all over the Middle East and North Africa (MENA). She has worked in Egypt, Tunisia, and Jordan on various human rights issues (respectively) such as migration and refugee resettlement, human rights abuses within prison settings, and abuses of migrant workers in the MENA region.

Upon her return from Tunisia to commence her senior year at Chapel Hill, her community was rocked with the loss of Deah Barakat, Yusor Abu-Salha, and Razan Abu-Salha in the Chapel Hill Shootings of 2015. She shifted her professional trajectory from the international arena to domestic crises surrounding growing concerns of institutionalized Islamophobia, racism, and the marginalization of religious and political identities.

As a grassroots activist and CAIR (DFW) intern who organized and provided on-the-ground support with regards to the Muslim ban at airports, she has seen how laws can have tangible consequences on the lives of the most marginalized in society. Conversely, she has also seen the importance of legal access in times of crisis. Her professional interests, which draw directly from her experiences and the experiences of those in oppressed communities, are two-pronged. She hopes to engage in governmental and law enforcement accountability while also working to provide direct legal support to oppressed individuals and communities throughout the United States who have a diversity of identities, challenges, and forms of religious and political expression. 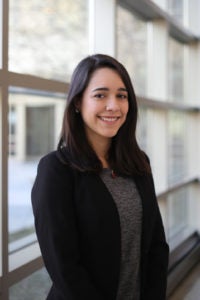 Ingrid is a Maryland native. She studied at the University of Maryland, College Park, where she earned her B.A. in Government & Politics and Spanish Literature and Culture.

During her undergraduate career, she focused on public policy and conflict resolution. She interned for the Department of Homeland Security (DHS), The National Consortium for the Study of Terrorism and Responses to Terrorism (START), and Congressional Research Service (CRS). These experiences within the federal government expanded her knowledge of terrorism and conflict research, big data, and policy applications.

Over the past two years Ingrid has worked for the Global Terrorism Database (GTD) at the National Consortium for the Study of Terrorism and Responses to Terrorism (START). While there she supervised the Target Classification domain and was responsible for the collection of data on the targets of global terrorist attacks for use by government agencies, researchers, and practitioners. Through this work Ingrid analyzed at-risk communities across the globe and conducted research on political, security, and civil society structures in conflict zones.

While at Georgetown Law, Ingrid hopes to incorporate her experience in terrorism research into her legal studies. She plans to focus on national security law and international humanitarian law. 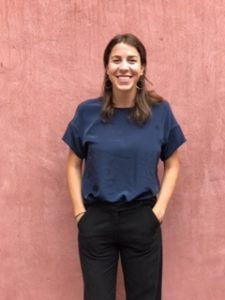 Ellen grew up in San Diego and attended UC Berkeley for her undergraduate degree where she majored in International Development with a regional focus on Latin America. During her time there she delved deeply into a variety of cross-border and international issues, culminating in an internship with Fair Trade USA. She joined Teach for America directly after graduation, teaching 5th grade English to students in a heavily immigrant and refugee neighborhood in south Nashville, Tennessee.

After completing two years in the classroom, she was a site coordinator for the Refugee and Immigrant Students Empowered (RISE) after-school program in the same community where she taught. Following her departure from Nashville and extensive travel in South America, she most recently settled in Mexico City to work with the Central America team at Amnesty International’s Regional Office. There she supported their efforts in research and advocacy for a wide range of issues, with a primary focus on recognizing violations of the rights of asylum seekers fleeing the Northern Triangle countries.

Since 2015 she has also volunteered intermittently with an organization providing humanitarian aid to vulnerable migrants on the Arizona – U.S. border and is an active supporter of their mission to decrease unnecessary deaths in the Sonoran desert corridor. These experiences helped shape her interest in working with unaccompanied minors at our Southern Border and pursuing at Georgetown Law a deeper understanding of refugee policy and the intersection of education access and immigration reform.