Professor Alvaro Santos, faculty director of Georgetown Law's Center for the Advancement of the Rule of Law in the Americas (CAROLA), speaks at the September 16 workshop on Investor-State Dispute Settlement (ISDS) Reform.

Sachs spoke via video from Madrid during “ISDS Reform in Latin America,” an all-day workshop hosted by Georgetown Law’s Center for the Advancement of the Rule of Law in the Americas (CAROLA). 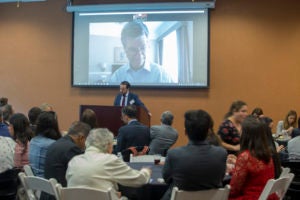 The workshop brought together delegates from Argentina, Bolivia, Brazil, Chile, Colombia, Costa Rica, Dominican Republic, Ecuador, Mexico, Peru and Uruguay to share their experiences in the negotiation, administration and litigation of investment treaties and to identify areas of concern and potential reform. 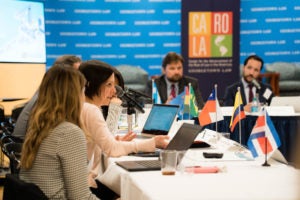 Maria Catalina Gaviria Bravo, an advisor of the Ministry of Trade, Industry and Tourism of Colombia, speaking at the event.

There has been a backlash against the investor-state dispute settlement (ISDS) system around the world, including in some Latin American countries, as concerns emerge about the growth of investors’ power and the reduction of government policy space, along with inconsistent decisions by investment tribunals. Although designed to attract investment, the system has given leverage to foreign investors who often sue States for millions of dollars when regulations affect their interests, based on expansive rights that are not even available to domestic investors.

“The theory of investor state dispute settlements is that supposedly, developing country governments want to create mechanisms for dispute settlement with investors in order to attract investment…and speed economic development,” he said. “Unfortunately, that simple theory is turning into a disaster.”

Most of the workshop discussions were by invitation only; public sessions included the keynote, a panel with scholars and NGOs, and an evening session presenting the main themes discussed throughout the day. 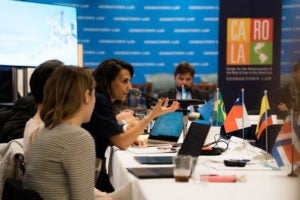 Mairee Uran Bidegain of the Ministry of Foreign Affairs of Chile speaks.

“We wanted to create a space for Latin American countries to discuss their experience with ISDS and identify possible areas of consensus for reform” said Professor Alvaro Santos, CAROLA’s faculty director, who led the delegates in the public evening session. “We at CAROLA are thinking about the future of international economic law, particularly on trade and investment…and we will continue to provide a platform for more discussions like this in the future.”

“We are gathering here today in order to see if we have common ground among other countries in the region…” said Gaviria Bravo, who referred to the reform discussions in the United Nations Commission of International Trade Law (UNCITRAL) and cited concerns including lack of consistency and predictability in the ISDS. “The idea…is to see if we can work together to have a very good outcome.”

The day was very rich in conversation, said Uran Bidegain. “[Many participants] wanted to see changes.” 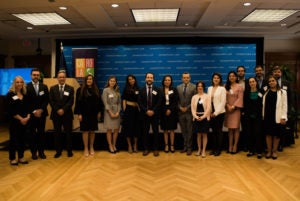 Rayo Zapata emphasized the need for flexibility to accommodate countries’ different needs and Gasser highlighted the Brazilian approach, which is based on dispute prevention and amicable resolution.

An observer from Panama said he was “grateful that the discussion was taking place, especially here at Georgetown.”

“We cannot have a solution that fits all the disputes and the realities…” he noted. “How do you [find] a problem that affects differently each Latin American state?”

The workshop was precisely designed to find where common ground lies.