In 2013, Maryland enacted a state law allowing residents to get driver’s licenses without providing proof of citizenship.

A law designed to help immigrants was, in other words, being turned against them. 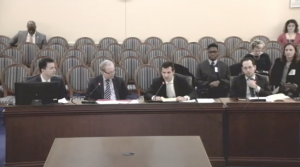 Jordan Foley (L’21) testifying before the Maryland House of Delegates.

Georgetown Law student Jordan Foley (L‘21) made that case this February in testimony before members of the Maryland House of Delegates. His goal was to build support for legislation designed to protect people from detention and deportation, which he argued endangers lives and undermines families, communities, and society.

The bill at issue would require Immigration and Customs Enforcement (ICE) officials to obtain a warrant before searching records and images filed with Maryland’s Motor Vehicle Association (MVA). Under current law, ICE agents can search the system remotely, without oversight and without cause.

Foley’s testimony came midway through a year-long course in Georgetown Law’s Federal Legislation Clinic. Students in this year’s clinic – which has shifted online due to the coronavirus pandemic – are learning how to advocate for policy change at the intersection of civil rights and technology. It is one of 18 clinics offered by the Law Center, which is home to the largest and most highly regarded clinical program in the country.

Practicing the ‘DC Art’ of Policymaking 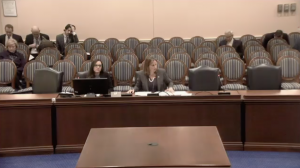 Michelle Rodriguez testifying before the Maryland House of Delegates.

When people think of lawyers, they tend to think of actors playing flashy litigators, like Tom Cruise in A Few Good Men, said clinic director Alvaro Bedoya, also founding director of Georgetown Law’s renowned Center on Privacy & Technology. People don’t often think of “legislative lawyers,” who make change through advocacy and policy and often have a far bigger impact on society, he said. As such, few law schools teach the “D.C. art” of legislative law, Bedoya explained. “That’s why the clinic is special.”

For Foley, the clinic has been everything he hoped it would be – and more. “It shaped me into a young attorney who … knows how to communicate and fight for what’s right,” he said.

Michelle Rodriguez (‘21), another clinic student advocate, testified before the Maryland General Assembly in March in favor of a bill that would ban the sale of public utility data to private companies. In her testimony, Rodriguez represented Georgetown Law’s Center on Privacy & Technology, well known for uncovering law enforcement use of face recognition technology to surveil the American public. Its emphasis on technology – a new area of study for her – has been “great” and is exactly what she hoped to learn about in law school, she said. 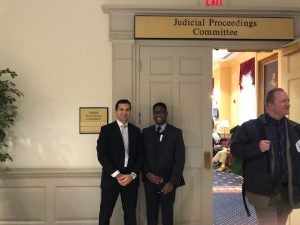 Two other Georgetown Law students also appeared before the Maryland General Assembly this semester: Nana-Kwabena Abrefah (L‘21) and Ben Orlebeke (L‘20). Abrefah spoke in favor of the MVA bill in February, while Orlebeke spoke in March on behalf of legislation that would stop government use of facial recognition technology. Like Foley, they testified on behalf of CASA, a leading immigrant rights organization in Maryland.

Crossroads of Immigration and Technology

Under Bedoya’s direction, the clinic and the center worked hand-in-hand to serve CASA’s legislative goals. The work gave students a unique opportunity to engage deeply with immigration, technology, and surveillance issues and to partner with a leading organization in the field. The four witnesses weren’t the only ones who benefited; other students in this year’s clinic also practiced the art of policymaking, but from different angles.

At the beginning of the school year, Emily Tucker, an immigrant rights movement lawyer and clinical teaching fellow at Georgetown Law, recruited CASA as a client in an initiative to explore how the government obtains private information. Clinic participants began researching ICE access points to Maryland motor vehicle data and other areas of concern. They then put together a comprehensive report on how government agencies collect, use, and share data about members of the public – painstaking and cutting-edge work that served as a foundation for a legislative agenda.

Under the guidance of their professors, students then teamed up with CASA advocates to come up with ideas for policy proposals, help draft legislative language, and lobby for CASA’s priority bills. Foley, who lives in Annapolis, was essentially “on-call,” commuting “down the street” to “walk” bills through the halls of the state legislature in search of political support.

“We Really Trusted the Students”

CASA advocates were so pleased with the students’ work that they invited them to testify before Maryland lawmakers – a first for the organization. “We really trusted the students, and they really delivered,” said Cathryn Paul, a research and policy analyst at CASA.

To prepare, students drafted oral testimony, converted it to talking points, and practiced explaining and defending the legislation in moot hearings. “Before I knew it, I was sitting before a bunch of Maryland delegates explaining technically what the bill did,” Foley said.
The MVA bill was on track to clear the General Assembly this year, Paul said, which would have been an “amazing win.” A likely veto from Maryland Gov. Larry Hogan, a Republican, had only energized the bill’s backers, she added.

The coronavirus pandemic cut the legislature’s session short, heartbreaking news for immigrants, advocates, and students in light of the bill’s momentum. But all is not lost, Paul said. She expects to hit the ground running when the assembly reconvenes, whether later this year or next January. “I think the momentum will continue,” she said. Students “laid the groundwork [and] set the framework to make sure that … this will get through.”