Seeking a new path forward on immigration, the Biden administration says it has been hampered by multiple crises — among them, the emergence of the COVID-19 Delta variant, the arrival of 50,000-plus Afghan refugees in the U.S. and the surge of Haitian immigrants at the southern border.

“The drive to reform legislation is unrelenting and correctly so,” said Mayorkas in his keynote remarks. “It is stunning how there is unanimity with respect to the broken condition of our immigration system and the failure of it.”

In addition to Mayorkas, the two-day virtual conference held on Sept. 27-28 featured leading policymakers, members of the media and immigration advocates, including Anthony Romero, executive director of the American Civil Liberties Union, and Esther Olavarria, White House Deputy Director of the Domestic Policy Council for Immigration.

“Georgetown Law is deeply committed to this field,” said Dean William M. Treanor in welcoming the more than 1,000 conference attendees, citing the work of the Center for Applied Legal Studies in particular. “In our asylum clinic, teams of students represent individuals and families from around the world in immigration removal proceedings.” 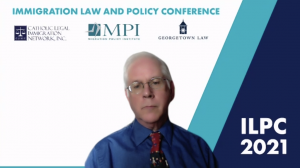 Treanor expressed special gratitude to Georgetown Law professor from practice Andrew Schoenholtz, who co-directs the asylum clinic, for his longstanding role as one of the conference’s principal organizers. “[His] work as a scholar and advocate is of the most profound significance,” Treanor said.

This year’s keynote session featured an all-Q&A format, suggested by Mayorkas himself. He fielded questions from moderator Doris Meissner, senior fellow at the Migration Policy Institute and former commissioner of the Immigration and Naturalization Service, as well as those submitted by conference attendees.

Mayorkas made news when asked by ABC reporter Quinn Owen about the number of Haitians from the Del Rio, Texas, refugee camp allowed conditional entry into the U.S, which he upped to an estimate of 13,000.

In an effort to stem the continued flow of migrants from Haiti, he said, “We are messaging to the diaspora community the fact that they should not take the perilous journey here, for the reasons we so compellingly saw over the last few weeks.”

Mayorkas emphasized that the COVID-19 pandemic has complicated every aspect of the already-overwhelmed U.S. immigration system. He defended the administration’s continued use of Title 42 of the Public Health Services Law to expel immigrants. “We are confronted with a population of people that as a general matter have a rate of illness of approximately 20 percent,” he said.

“When one is speaking of 7,500 people on average every day being encountered on the border, our system is not built for that in a COVID environment where isolation is required,” he continued.

Anthony Romero of the ACLU, which filed a preliminary injunction against the Biden administration to prevent the expulsion of families under Title 42, later pushed back on Mayorkas’ statement, arguing that administering 7,500 COVID tests per day could be easily accomplished.

Questioned on the challenges of Afghan refugee settlement, Mayorkas pointed with pride to the work of his department in implementing Operation Allies Welcome, including the surging of personnel and technology to conduct vetting in transit countries.

“In the midst of addressing an unprecedented sweep of natural disasters, we were still looked to in leading the federal response. And that is a testament to what we’ve proven is our operational capacity.”

Among the pressing immigration issues facing the Biden administration is the status of the U.S. asylum system, the focus of a panel discussion moderated by Georgetown Law’s Andrew Schoenholtz. In his recent book, The End of Asylum, Schoenholtz — together with co-authors Professor Philip G. Schrag of Georgetown Law and Professor Jaya Ramji-Nogales of Temple Law — describe the system’s effective dismantling by the Trump administration and provide a roadmap for its rebuilding.

The situation is dire, as panelist Ted Kim explained. Kim, the acting associate director of the
Refugee, Asylum and International Operations Directorate (RAIO) within U.S. Citizenship and Immigration Services, said that USCIS currently has a backlog of more than 411,000 pending affirmative asylum applications.

Kim pointed to the expedited removal process created in 1996, which included an exception for asylum seekers. “The system was designed for a different era when we didn’t see large numbers of humanitarian crises on the border,” he said. “The problem is that in the past seven to eight years, the exception has totally swallowed the rule.”

Panelist Alvaro Botero, coordinator of the Unit on Refugees and Forced Displacement for the Organization of American States, stressed that regional cooperation, rather than unilateral action, is critical in addressing the root causes of forced migration from Central America. These include extreme violence, economic inequality, food insecurity, political corruption and natural disasters stemming from climate change. 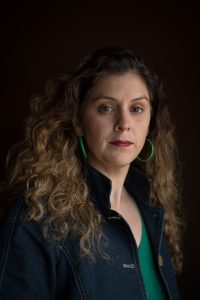 Laura Peña (L’11), director of racial and economic justice at the Texas Civil Rights Project, spurred a robust conversation among conference attendees with her impassioned appeal to end the legacy of border militarization, based in white supremacy, that began with the founding of the U.S. Immigration Service in 1904. “There is no rooting out this history — only cleaning the slate and starting over.”

Peña described a now-dismantled refugee camp in Matamoros, Mexico, supervised by the U.N. High Commissioner on Refugees, as a possible model for creating safe zones for asylum seekers. “It’s acknowledging that this is a situation better suited for people who have better experience in dealing with refugees.”

With all eyes on Congress to take action on fundamental immigration reform, a major topic of discussion throughout the conference was the recent Senate parliamentarian ruling denying a pathway to citizenship through the current budget reconciliation bill.

Both Mayorkas and Olavarria do not view the decision as final. “This isn’t over by any stretch of the imagination,” Olavarria said.

But Republican strategist Kevin Madden, currently executive vice president of advocacy at Arnold Ventures, made clear that any kind of sweeping reform bill will not gain traction in the current political climate. “Immigration is the most animating issue for Republican primary voters,” he said.

With her day-to-day interactions on the border, Peña issued a reminder to keep the experience of individual migrants at the forefront. It’s something she did after leaving her position as assistant chief counsel for U.S. Immigration and Customs Enforcement, and drew on her Georgetown training in her 2018 decision to call out her former agency for human rights abuses.

“At the core of these high-level policy conversations there are real human lives and human suffering that happens every single day,” she told conference attendees on Monday. “And the cost is so high.”