More than two dozen current and former state officials, representing all regions of the country, helped the Georgetown Climate Center celebrate its 10th anniversary at Georgetown Law on February 21.

When Georgetown Law launched what is now called the Georgetown Climate Center in February 2009, the future for action to fight climate change could not have looked brighter.

State and local governments, already coping with the day-to-day problems of climate change, were poised to serve as models for the federal government. Governors from Kansas to California — including then-Governor Arnold Schwarzenegger — were tackling environmental challenges.

At the federal Environmental Protection Agency, then-Administrator Lisa P. Jackson and future Administrator Gina McCarthy were working hard — as was Georgetown Law Professor Lisa Heinzerling, who had just joined the EPA as senior climate counsel to the administrator.

Michael Northrop, leader of the Sustainable Development Group at the Rockefeller Brothers Fund, was working with these leaders to create a center to bridge the gap between the federal government and the states on climate. Who could lead such an institution, and where could it be housed? 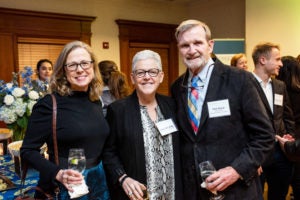 The place, of course, was Georgetown Law; the person was the Center’s now-longtime Executive Director and Professor from Practice, Vicki Arroyo (L’94). In attendance were close to 200 climate leaders, including state officials, faculty, staff, students and alumni to celebrate the Center’s unparalleled influence and impact.

“All this magically happened…,” Northrop said. “Georgetown has been awesome every step of the way, the students are amazing… You think about what’s happened since — the work on adaptation, electric vehicles, Clean Power Plan, all the convening, getting to international meetings…the conveyor belt is right here.” 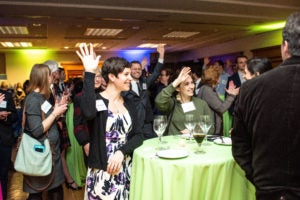 Current and former staff of the Georgetown Climate Center raise their hands.

At the top of a long list of accomplishments is GCC’s role in developing (and now defending) the Obama Administration’s Clean Power Plan. The Center has also been instrumental in shaping federal policy to adapt to climate impacts, supporting state and local adaptation efforts and bringing together the states to promote clean energy and tackle regional challenges.

It has facilitated a state Transportation and Climate Initiative, a major bipartisan regional initiative of 12 states plus Washington, D.C., to cap emissions and invest in low-carbon and resilient transportation infrastructure. And it has created indispensable resources and tools for states.

Arroyo thanked the many funders, staff, students, alumni, faculty, and city and state leaders who have helped make the Climate Center successful. “You are here because you have helped our Center reach this milestone,” she said. “We are so grateful.”

Professor Peter Byrne, the center’s faculty director, recalled the “great sense of optimism” at the launch “about the ability of the states to work with the federal government.”

“Georgetown is very proud of its environmental law and policy program,” Byrne said. “It is truly one of the best in the world. The Climate Center is a boost that puts us above many others — because of its connections with the real-life policy world at the state and federal levels.” 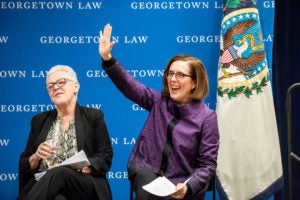 “[Georgetown Climate Center] has done extraordinary work for ten years,” said Schwarzenegger, who helped launch the Center along with other governors.

A decade later, he praised the Center’s focus on local and state government. “The reality of it is, that’s where the responsibilities are: 70 percent of the reduction of greenhouse gases are at the local and state level, not at the federal level.”

“You guys are moving in the right direction, and you really inspire the rest of the nation…,” Schwarzenegger said. Referring to his most famous movie line, he added, “I really hope that I’m going to be back.”

McCarthy said that the Center has done “amazing work” on climate over the past ten years. “We will let the science and we will let the facts move forward. Democracy isn’t a spectator sport…we do not want to let the young people have to carry the burden of society. Let’s be there.”

“It’s carved out an indispensable role in the fight against the climate crisis… The Center has been crucial in supporting states across the nation… You’ve helped states design climate legislation, you have brought states and stakeholders together to inform EPA’s design of the Clean Power Plan, you’ve helped make a pathway for states to engage in climate negotiations, and this has been very effective,” he said. “The chaos and status quo in Washington, D.C., has not been able to stop us in the states.”

“[When] we had a federal government that was working to develop the Clean Power Plan, the GCC was there every single step of the way with us. It was that foundation that enabled us to move forward on legislation…that made Oregon the first state in the entire country to intentionally move away from coal-generated electricity, and doubling our renewable portfolio standard,” she said, to great applause. “I don’t have to tell anybody in this room that state action and leadership is absolutely instrumental at this point in time…this nation needs leadership, and it needs it from states[.]”