Georgetown Law Hosts “Challenges to Rule of Law in America”

The topic was the rule of law in America — discussed at Georgetown Law on March 8, when the Institute for Constitutional Advocacy and Protection, and Checks & Balances (a group launched by Conway of conservative and libertarian lawyers), teamed up to examine the role of lawyers in promoting civil discourse, upholding the separation of powers, and defending the rule of law. 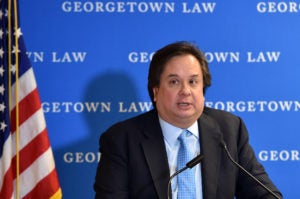 “We hope to contribute to a dialogue about the rule of law, a dialogue that brings people of all political stripes together,” Conway said. “Because what divides us politically really pales in comparison to what should unite us, which is devotion to constitutionalism and the rule of law… The issues that divide us, the ordinary political issues of the day, are often trivial in comparison to the things that define us as a free people, and as a constitutional democratic republic.”

Among the problems? Conway cited the president’s attacks on the press and criticism of the Department of Justice. “If people were to get indicted or not indicted on the basis of whether the president likes them, we wouldn’t have a republic — we have a banana republic,” he said.

Georgetown University Professor of Government and Foreign Service Anthony Clark Arend noted that “the judiciary has been called into question in ways that we have not seen previously.”

“A federal judge [Georgetown Law alumnus James L. Robart (L’73)] has been called a so-called judge,” he said. “The entire Ninth Circuit has been denigrated. And judges have been described based on the president that nominated them — Obama judges and Bush judges — necessitating the Chief Justice to intervene in a nearly unprecedented fashion.”

“We may take this for granted at a law school…” Arend said, “but courts need to resist political pressure, and courts also need to resist making policy decisions.”

What is the rule of law? “It’s this agreement that the government has with the people it governs, and it depends on transparency, stability, predictability, and fair process, by which rights and responsibilities are decided by diverse and independent judges,” McCord asserted. “I am afraid that under this administration, the president’s version of the rule of law is, what do I, Donald Trump, think the law should be — as opposed to this compact…between the government and those who are governed. We see this in the degradation of so many of our institutions.”

McCord has tremendous faith in career government officials, such as those at the Department of Justice where she spent almost her entire career, to “keep the ship sailing.”

Still, “my concern is that with every passing month and year…in the psyche of the American public,” — “attacks on our institutions, our judiciary, Congress completely abdicating its role” — will become more normalized, she contended. “It will fundamentally change the way people feel about our democratic institutions.”

Geltzer, who also worked in government, cited the undermining of what he called “cognitive infrastructure.”

“There was a fundamental sense of integrity of certain institutions,” he said. “[There is] this growing sense that those institutions should not be thought of the way many of us did before… As that seeps in over time, that’s an infrastructure that’s really hard to protect, and even harder to rebuild.”

Challenges to Rule of Law in America

Friday 3/8: Join us for a discussion on the role of lawyers in promoting civil discourse, upholding the separation of powers, and defending the rule of law. This event will feature several legal heavyweights: Anthony Clark Arend will deliver a keynote with a welcome by George T. Conway III. Carol Leonnig of The Washington Post will moderate a panel featuring Joshua Geltzer, Stuart M. Gerson, Mary McCord and Alan Charles Raul.Click "Get Reminder" below to be notified when our stream is live.