For the fourth year in a row, Supreme Court Justice Ruth Bader Ginsburg came to Georgetown Law to address the newest entering class. This time, she got a Class of 2022 t-shirt.

The justice has been to the Law Center many times; her late husband, Professor Marty Ginsburg, was a faculty member here. Adjunct Professor Mary Hartnett and Professor Emerita Wendy Williams are the justice’s authorized biographers.

But for a first-year law student, getting to see the famous justice in person on September 12, during the second week of law school, was no ordinary occasion. The justice spoke of some of the highlights of the past Supreme Court term and previewed some upcoming cases. 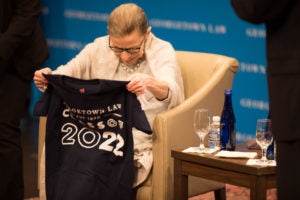 Last year’s cases included Department of Commerce v. New York, regarding the inclusion of a citizenship question on the 2020 census forms, and the gerrymandering case Rucho v. Common Cause, in which a 5-4 majority of the Court held that partisan gerrymandering claims present political questions beyond the reach of the federal courts. Ginsburg joined Justice Elena Kagan’s dissent in the latter.

For the first time last term, a majority of the clerks at the Supreme Court were women (Georgetown Law’s 1L class also contains more women than men). It is an “enormous” change from the early 1960s, when young Ginsburg, tied for first in her class in Columbia, could not find employment as a lawyer. Only when a professor threatened never to refer another Columbia student to him did federal Judge Edmund L. Palmieri give Ginsburg a clerkship, and she would go on to build a storied career of advocating for gender equality. As a practicing lawyer, Ginsburg argued six landmark gender equality cases before the Court, won five, and transformed the law.

Retired Justice Sandra Day O’Connor and Ginsburg would later remark that if there had been no discrimination to fight against, their lives might have been ordinary. “We would probably be retired partners from some law firm…we had to carve a different path, and we ended up on the Supreme Court,” Ginsburg said.

Upcoming matters include Mathena v. Malvo, involving the juvenile D.C. sniper of 1998, and the termination of Deferred Action for Childhood Arrivals (DACA) case. “I can safely predict that the new term will have a fair share of closely watched cases and I look forward to the challenges ahead,” Ginsburg said.

The justice’s 30-minute talk was followed by a 30-minute conversation with Dean William M. Treanor, in which the dean asked questions previously submitted by students. Are there any cases that did not reach the Court that the justice would have liked to consider? “If the question is important enough, we will have another opportunity,” the justice said, as she explained the role of the Court.

Thoughts on friendships between those of opposing beliefs, given the justice’s friendship with the late Justice Antonin Scalia (C’57)? The justice noted the “good working relationship” between the late Senators Ted Kennedy, Democrat, and Strom Thurmond, Republican, in Congress. “Someday, we will get back to the way it should be,” she said.

If the justice could add one thing to the Constitution to help America, what would it be? The Equal Rights Amendment. “I have three granddaughters,” the justice said, taking out a copy of the Constitution. “I can point to the First Amendment protecting their freedom of speech, but I can’t point to anything that explicitly says that men and women have equal stature before the law. Every constitution in the world [since 1950 says] that; ours doesn’t.”

Calling the justice “transformational” and “inspirational,” Treanor made the justice an “honorary” member of the Class of 2022 at the close of the program by giving her a t-shirt.

“It’s an amazing experience for me to see everybody here, and to see the admiration and the excitement and the way in which the justice inspires us all,” said Treanor, who noted that Ginsburg, and the late Justice Thurgood Marshall, would have been figures of great historical importance even if they had never served on the Supreme Court. “I can’t think of a better way to start a legal career, or a more inspiring way, than to hear from Justice Ginsburg.”

U.S. Supreme Court Justice Ruth Bader Ginsburg addressed the first-year class at Georgetown Law on Thursday, Sept. 12. After her remarks, Justice Ginsburg joined Dean William Treanor for a discussion and a Q&A with our 1L class.