When Harry Litman, the former U.S. attorney, former Deputy Assistant Attorney General, and opinion columnist for The Washington Post, wanted to do a week of tapings of his “Talking Feds” podcast in July, he wanted to know whether Georgetown Law’s Institute for Constitutional Advocacy and Protection (ICAP) wanted to be a part of it. Of course Executive Director Josh Geltzer and Senior Litigator Mary McCord said yes.

“Talking Feds” is a roundtable discussion that brings together some of the most well-known former federal prosecutors and DOJ officials in the country to analyze some of the most pressing questions, including the Mueller probe and related investigations. McCord, who served as Acting Assistant Attorney General for National Security at DOJ and is a former long-time federal prosecutor, had been on the podcast previously in a May 21 episode titled Game of Trump: A Song of Vice and Ire. 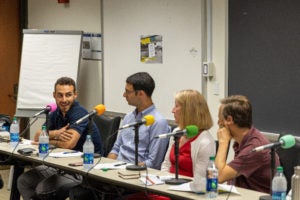 The latest round of discussions, recorded in McDonough Hall’s Room 141 the week of July 8, was sponsored by ICAP and the American Constitution Society. A July 9 recording, “Feds Doing Good: Stepping into the Breach of Legislative Inaction,” featured six of the nine members of the ICAP team who are now pursuing significant legal work outside of the Department of Justice: Besides Geltzer and McCord, panelists included ICAP litigators Amy Marshak, Nic Riley, Seth Wayne and Annie Owens, all DOJ alumni. 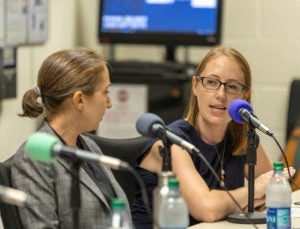 “I loved the opportunity to go to work every day as a career attorney, and do interesting and meaningful work…” said Marshak, who previously served as counsel to the Assistant Attorney General for National Security. “That said, I have exactly that opportunity at ICAP…[ and] we work with students, we get to participate in various moot courts going on…and be part of a law school environment.”

“The stakes for the House are enormous,” Litman said. “They must use the opportunity if they can to make the American people understand the gravity of the offenses and misconduct laid out in the report, as pretty much anyone of the .01 percent who’s actually read the 448-page report does. That’s a complicated undertaking with expected strident opposition from the committee Republicans and the overall need to treat Mueller respectfully.” 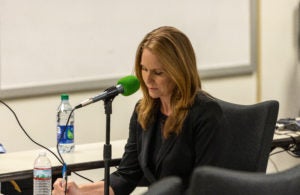 Other panels included “The Pardon Power: Norms and Abuses,” and “Principles v. Outcomes: Republicans for Rule of Law” with Adjunct Professor Carrie Cordero, whose roles in government have included Counsel to the Assistant Attorney General for National Security; Senior Associate General Counsel at the Office of the Director of National Intelligence; and Attorney Advisor at the U.S. Department of Justice.